On to Chiang Rai 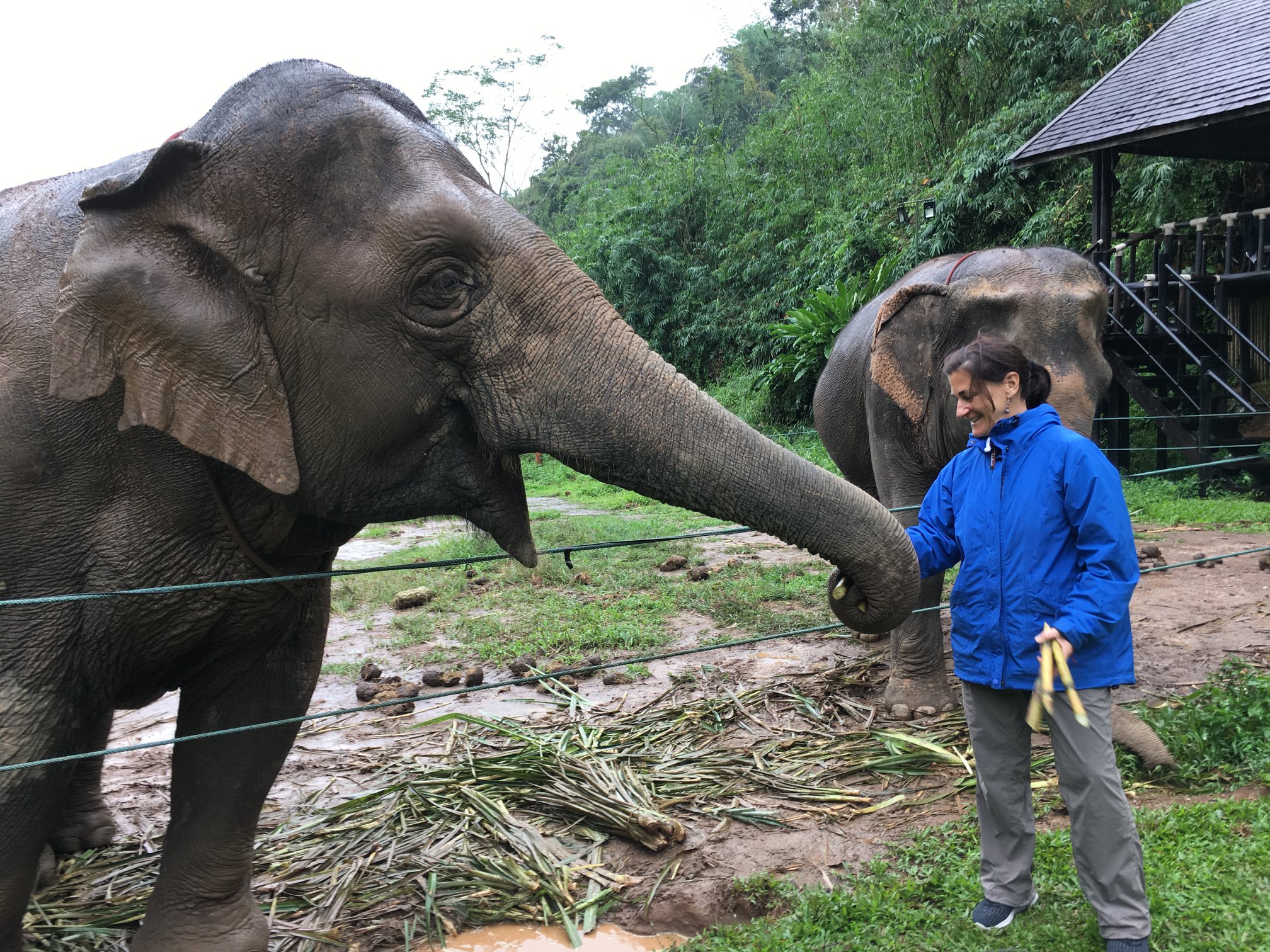 Guest Post by Amy Perry Basseches
After Bangkok, I flew to Chiang Rai, the northernmost large city in Thailand, to begin two days in and around "The Golden Triangle," where the borders of Thailand, Laos, and Myanmar meet at the confluence of the Ruak and Mekong Rivers (formerly one of the most extensive opium-producing areas of the world). We stayed in Chiang Saen, a part of the Chiang Rai Province that literally sits on the Mekong and from which you can see Myanmar and Laos. A "three country" boat trip can be taken here which includes travel by tuk-tuk and longtail boat, stopping at local markets, temples, and ruins.
In Chiang Rai, we visited three temples, Wat Rong Seua Ten (Blue Temple), Wat Rong Kun (White Temple), and Baan Dam (Black Temple). Although sometimes historic temple ruins were present, these are modern creations: the Blue Temple was finished in 2016, the White Temple opened in 1997 and was designed by artist Chalermchai Kositpipat, and the Black Temple is artist Thawan Duchanee’s "artful portrayal of hell." Afterward, I loved eating at Chivit Thamma Da Coffee House, Bistro & Bar, a  "Slow Food" restaurant, featuring Hill Tribe organic eggs.
All of the above paled in comparison to the highlight of my time in Chiang Rai and Chiang Saen, The Golden Triangle Asian Elephant Foundation. The GTAEF was set up to rescue elephants, mahouts (caretakers) and mahout families from illegal logging camps, the street, and abusive shows. Our hotel (to be detailed in a separate blog post) overlooked the elephant sanctuary, home to approximately 40 elephants. Here, the elephants, mahouts, and mahout families are housed, fed, and provided health care, and the mahouts’ children educated.
Asian elephants are listed on The International Union for Conservation of Nature’s Red List of Threatened Species, which means they have had at least a 50% decrease in population in the last three generations. They face habitat loss, as well as poaching. The current best estimate for Thailand’s remaining wild population is around 2000 to 4000.
Many tourists seek an "elephant experience" while in Thailand. Tourism remains the main income source available to keep the majority of Thailand’s captive elephants fed, but it is important to work with businesses and the mahout community to promote welfare and sustainability. Especially after being in Thailand, I can say with certainty: ask ActiveTravels for assistance in choosing your elephant experience in Thailand. There are a lot of not-so-great ones offered.