Nova Scotia Week, A Walk Through History in Lunenburg 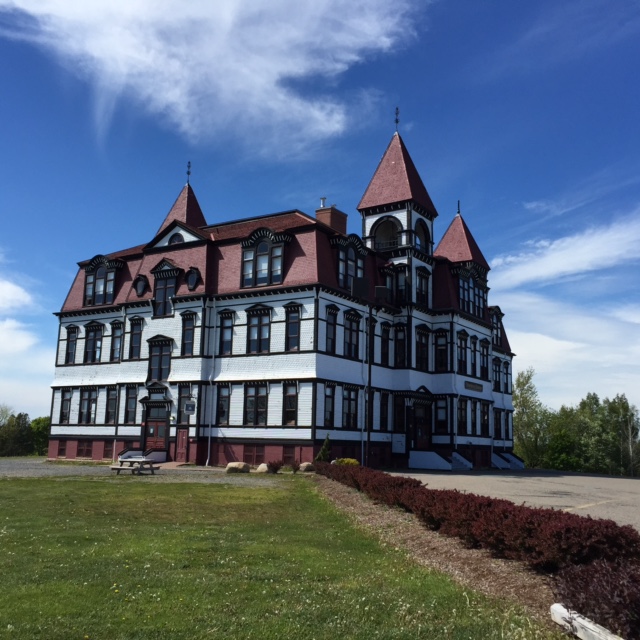 One hour south of Halifax, the seaside community of Lunenburg is one of only two cities in North America dubbed a UNESCO World Heritage Site (the other being Quebec City). What UNESCO found fascinating was the fact that Lunenburg was a perfectly planned British colonial settlement, a 48-block grid designed in London and plopped down on the coast of Nova Scotia in 1753. They were also obviously impressed with the preservation because Lunenburg remains one of the most charming towns on the Atlantic coast. The British were successful in recruiting some 1400-plus people to Lunenburg, mostly of German and Swiss descendant, including the ancestors of my Lunenburg Walking Tours guide, Ashlee Feener, an 8th-generation descendent. We started our hour-long stroll through town at the highest point in Lunenburg, the former site of the citadel and now home to the castle-like Lunenburg Academy.  No longer a public school, the Second Empire structure built in 1895 is now an international music academy attracting students from across the globe, the first hint that this storied fishing community has transformed into a cultural destination.

Those first descendants thought they were coming to Canada to farm but their shovels and ploughs soon hit rock. They looked to the sea and by the late 1800s, Lunenburg had become the fishing capital of Canada, with large schooners heading to the Grand Banks of Newfoundland and often returning after a summer with 100,000 to 300,000 pounds of cod. Ashlee led us down York Street to view a Victorian home with a Widow’s Watch, a cupola with bay windows that overlooked the sea, where a ship captain’s wife could hopefully her husband returning home. Next door was one of the oldest homes in Lunenburg, a gabled one-bedroom Cape Cod-style home currently on the market for $287,000. On Fox Street, the red Georgian-style Lennox Inn was built in 1791 and is the oldest continuously operating inn in North America. Another highlight of the tour was the stunning St. John’s Anglican Church, one of five churches in town. Walk inside to see the ribbed wooden roof that could only be built by shipbuilders who knew their way around the ribs of a hull. We walked past the multi-colored façade and gingerbread trim of the Mariner King Inn, where I’m happily spending the night. Our tour ended on the docks next to the recently resorted schooner, Bluenose II, Nova Scotia’s ambassador of the sea, a fitting tribute to Lunenburg’s past.
The ebullient Ashlee and her business partner, Shelah Allen, a mere 7th-generation descendent also offer haunted tours of Lunenburg and its many scary-looking Victorian homes at night. Go on either tour and you’ll be happy I sent you.