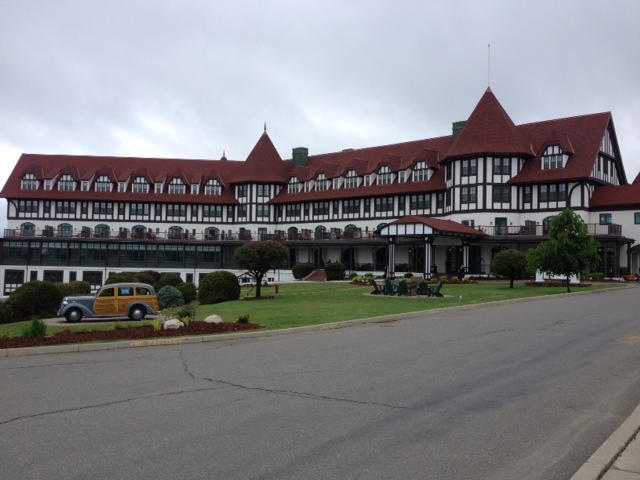 First opened in 1889, the Tudor-style Algonquin Resort is one of a handful of classic resorts built by the Canadian Pacific Railroad, alongside other gems like Chateau Frontenac and the Fairmont Banff Springs. Based in the charming seaside town of Saint Andrews by-the-Sea on New Brunswick’s Bay of Fundy, the Victorian grande dame was in dire need of a facelift. Thankfully, New Castle Hotels and Southwest Properties came to the rescue, purchasing the hotel from the provincial government in 2012 intent on restoring the national treasure. After being closed for 18 months, the resort officially reopened yesterday with a celebratory ribbon-cutting. Unfortunately, I missed meeting the New Brunswick Premier because I had to first make a pitstop.
Talk to any local from St. John or Fredericton and mention that you’re on the way to St. Andrews and they’ll tell you to get off Route 1, Exit 45, for lunch at Ossie’s. The lobster-in-the-rough joint is known for its lobster rolls, fried clam plates, and extra-thick milkshakes. Being the Jane and Michael Stern fan that I am, there was no way I was going to miss this opportunity. The lobster roll was a mere ten bucks, with mounds of fresh lobster toppling out of the perfectly toasted bun. After devouring it in a matter of seconds, I drove down the road to another New Brunswick favorite, Oven Head Salmon Smokers. Taking advantage of the salmon farms found in the Bay of Fundy, owners Debbie and Joseph Throne have been smoking salmon since 1986. At President Obama’s inauguration, the smoked salmon came from here. I tried the smoked salmon, salmon jerky, and salmon pate and all were exceptional, the reason why people call with orders from as far as Japan.
Less than 30 minutes later, I arrived at the Algonquin and its signature red roof, which never looked better. Inside the long lounge area and adjacent Braxton’s Bar, there’s now a sense of style that was sorely lacking. Toronto designer Robynne Moncur has added fireplaces, modern chandeliers, and innovative touches like century-old floor plans hanging from the walls. The rocking chairs are still found on the long verandah, now next to outdoor lighting and fire pits. On the second floor, spacious balconies have been added to 16 Patio Suites so that the chaise lounges can be bathed in morning sunshine. Across the street is a large indoor pool, new fitness area, and 3-story water slide. Complimentary bikes are available for a spin and Starbuck’s coffee is available in the gift shop for free. Add the signature 18-hole golf course, outdoor pool, and, of course the exemplary restaurants, boutique shopping, and whalewatching St. Andrews offers, and you understand why folks are excited about having a world-class resort back in town. It’s no surprise that The Algonquin is Canada’s first Autograph Collection hotel, Marriott International’s upscale portfolio of independent hotels.