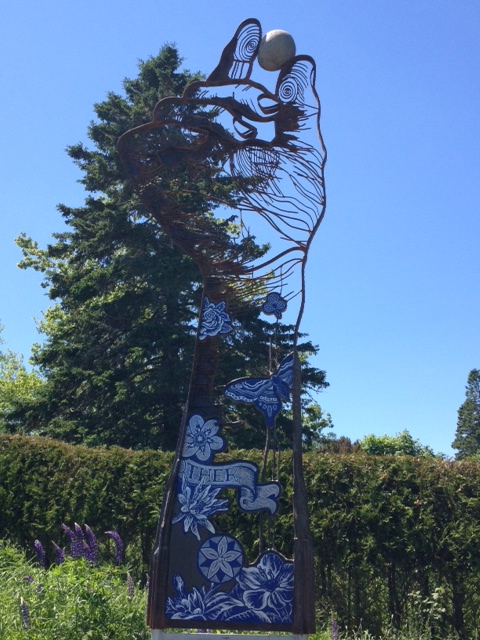 You know it’s a special day when you spot a bald eagle sea kayaking in the morning and then go biking with a kilt on in the afternoon. It was a perfect morning to go out kayaking with Eastern Outdoors, even with the slight wind we had in the beginning. I followed my guide Jess as we circumnavigated Navy Island, the massive fir-studded isle that sits just across St. Andrews in Passamaquoddy Bay. We passed lobster boats picking up their traps, a herring weir whose posts were coated with seaweed, and numerous cormorants flying overhead. As we turned the corner and started heading back I spotted a bird with a white head. It didn’t move and Jess thought it was just a piece of driftwood. Then as we drew close the graceful bald eagle took flight, gliding effortlessly with its wide wingspan. Jess mentioned that her favorite time to paddle was during high tide because you can kayak straight to the storefront. Unfortunately, we were smack dab in the middle of low tide, a 20-foot tidal difference, and had to walk the kayaks the length of a football field to get back to the kayak shop.
After lunch of salmon banh mi at the snazzy new Braxton’s Pub at the Algonquin Resort, I high-stepped it over to one of my favorite spots in the entire province, Kingsbrae Garden. In fact, in 2010, I named it one of my Top 5 Destinations of the year. After revisiting the garden, I don’t regret my decision one bit. The mix of whimsy and beauty make it an enchanting outing for all ages. This time of year, the rhododendrons and irises are all in bloom. I love the Scents & Sensitivity Garden, where you can rub the soft velvety lambs ear and smell the sweet lemon scented geranium. Other highlights are the alpacas, including a one-month old, and the Sculpture Garden, a juried show each year that features the rising artistic talent in Canada.
Then it was time to bike, Scottish-style, with Kurt Gumushel. An elementary school gym teacher by day, Kurt runs Off Kilter Bike at nights and in summer. Kurt’s dad moved to Canada in the 60s from Turkey and set up shop in St. Andrews as a tailor. It wasn’t long before he was making kilts for the locals and developed a reputation as a master kilt maker. A few years ago, he designed a kilt for some of the local mountain bikers and Off Kilter Bike was born. Kurt tossed me a kilt to wear and we were off. First we biked along the shoreline of Chamcook Lake on a wide level doubletrack. Then Kurt took me downtown to try the Van Horne Heritage Trail, a sweet ride though forest and along saltwater marsh. One km of the ride is freshly paved, a mere week old, so it was fun to try. Since Kurt grew up here, he knows everything about the history, architecture, and people of St. Andrews. He’s happy to design half or full-day rides based on your interest, be it serious off-road biking or a chilled ride on roads through town to learn about the architecture.