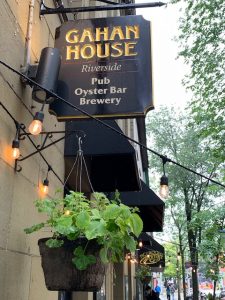 When I last strolled into the Lunar Rogue Pub in 2014, owner Frank Scot had over 500 types of whiskey for sale. Today, he has close to 950 varieties that include Scotch, Irish Whiskey, Japanese Whiskey, and a whole glass enclosed back cabinet devoted to bourbon, which, of course, I had to partake. If you’re searching for a taste of Killyloch 67 or Glen Flagler 73, no problem. It will only set you back $800 an ounce in Canadian dollars. Or better yet, have a taste of the Mortlach 12 Year Old, one of Frank’s favorites, as he sits down and joins us for dinner.

It’s no surprise that Whiskey Magazine has named the Lunar Rogue one of the great whiskey bars of the world. In 2016, Scotland bestowed on Frank the coveted Keepers of the Quaich title for being such a wonderful ambassador for Scotch. Scott is also founder of the Canada’s oldest whiskey festival, one of the rare joint ventures between the Canadian government which controls the liquor trade, and a private business owner. The 4-day festival takes place each year in November and usually sells over $500,000 worth of whiskey to some 6,000 collectors that come to Fredericton from across the globe. This year’s event might not happen since alcohol sales surged during the pandemic and there’s a shortage of whiskey. That would be a shame because the Feast for the Senses event, where whiskey is paired with the Turner, Sisley, Dali, and Lucian Freud paintings, among others at Fredericton’s renowned Beaverbrook Art Gallery, is one of the signature New Brunswick events of the year, often selling out in minutes. In the meantime, you can download the Lunar Rogue app and read about all those whiskeys Frank has managed to collect.

If you prefer craft beer to whiskey, Fredericton now boasts the largest number of craft brewers per capita in the the Atlantic Maritimes with 26 local breweries, cideries, distilleries, and wineries. Not too shabby for a population a tad over 65,000. While in town, I tried the Yippee IPA from one of the oldest establishments, Picaroons, a pilsner from Graystone, and an Island Red from Gahan House Riverside, set in a former bank. The beers are even tastier if you pedal some of the 120 kilometers of bike trails found in Fredericton, much of which line the shoreline of the wide St. John River. Second Nature Outdoors rents bikes and offers guided rides that feature the best of the local cuisine and beers. It’s the perfect introduction to a city that should not be overlooked on your New Brunswick itinerary.