My Visit to Luang Prabang 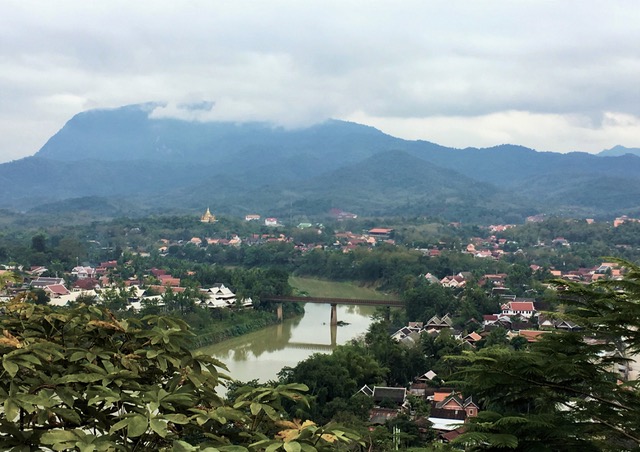 My first trip to Southeast Asia was winding down, one more stop to go: Luang Prabang, a UNESCO World Heritage Site known for "its remarkably well-preserved townscape reflecting the alliance of two distinct cultural traditions" (French and Lao). Laos has 160-plus ethnic groups, speaking a total of 82 distinct languages. The two guides I met, ST and Nick, were both Khmu, from villages near Luang Prabang (the Khmu were the indigenous inhabitants of northern Laos). A stop I really enjoyed was The Traditional Arts and Ethnology Centre, housed in the former residence of a French colonial judge. Founded to preserve the diverse ethnic cultures and peoples of Laos, it serves a crucial function for visitors too.
As with many towns we visited over the entire trip, there were night and mornings markets to visit (although Laos has been Communist since 1975, there is commercial activity everywhere!), morning alms to be given to the novice monks, and temples to be respected. Nick also pointed out to me that Lao Buddhist temples have different architecture from Thai ones: Wat Xieng Thong, built here in 1560, was shorter, made more of wood, with more drawing / painting and fewer stones, than its Thai counterparts. Nick himself had been a monk for 7 years, starting at age 13, and, while we climbed Mt. Phousi, he told me that 70% of Lao boys become novices because it is, like in Thailand, the way to an education and out of the village. One can stop being a monk at any time. Nick left to attend university, obtain a business and tourism degree, get married, and have a child. A few generations back, his family were opium farmers, he said.
A real highlight for me was a visit to the Laos Buffalo Dairy, and this wasn’t just because of the delicious cheeses, ice creams, and cheesecakes we all ate. The story behind this place is very unusual — people in Laos did not milk their water buffalo as was done in other places. So Susie (an Australian corporate executive who moved here from Hong Kong), and her team, showed local people how, and are now helping the area. "We cooperate with people from villages in and around Luang Prabang by renting their buffalo, which provides the families with a regular income stream from an underutilized resource, namely female buffalo; male buffalo being sold for meat. We built a facility for milking their buffalo and keeping them well fed, healthy and safe." I wanted to stay longer, eat more cheese, feed more buffalo, and learn more about this cool sustainable agriculture and community development project.