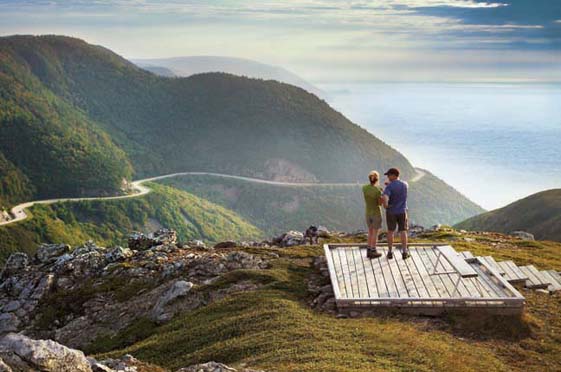 The landscape of Cape Breton is a mesmerizing mix of rolling summits, precipitous cliffs, high headlands, sweeping white sand beaches, and glacially carved lakes, all bordered by the ocean. The Cabot Trail is a road that hugs the Gulf of St. Lawrence on the rugged northwestern edge of Nova Scotia, where around every bend you want to pull over, spew expletives of joy at the stupendous vista, and take another snapshot. Indeed, it’s as close to Big Sur as the East Coast gets. Add bald eagles, moose, coyotes, and pilot whales fluking in the nearby waters and you want to leave the car behind and soak it all up on two legs.

In October 2012, I visited Cape Breton and sampled one of the most popular trails, Skyline, a 5.7-mile loop atop the ridge of a coastal headland. I took deep breaths of the sweet pines as I meandered over the roots and rocks on the grassy path. Eventually, the trail snakes to the left offering expansive views of the sea. At the halfway point, a boardwalk leads down the headland and wow, what a majestic stroll it is. To the left is a backbone of peaks, to the right is all ocean as far as the eye can see. I sat down on a bench and bit into my honeycrisp apple, watching a whale spout. It was hard to leave, but after having my fill, I made my way back on the loop. Within minutes, I was staring at a mother moose and her calf. Memorable!