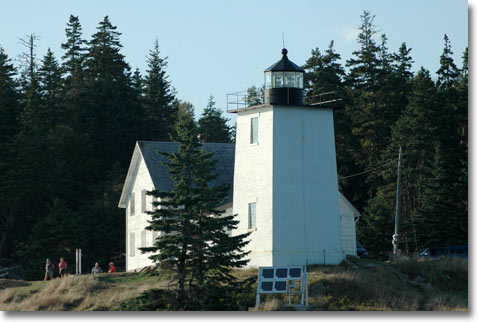 “Heave Ho!” went the cry as all hands pulled down on a thick rope to haul up the mainsail. “Heave Ho!” the crew chanted again and the schooner headed upwind, all sails gleaming white against a cloudless blue sky. The Captain took the wheel as the boat quickly gained momentum passing another anonymous island crowned with pines and rimmed with the ubiquitous Maine granite. Behind us was the vast expanse of the Atlantic, dotted with multi-colored lobster buoys and lined with the only mountains on the coast north of Brazil. The crew were passengers from around America and Europe who delighted in the chance to hoist the sails, bilge the pump, even take a turn at the wheel sailing this big boy.

Maine’s 2500-mile stretch of jagged coastline, where long inlets form sheltered bays, is tailor-made for sailing. No other sport gives you the freedom to anchor in a pristine cove, hike on an untrammeled island, and sleep with a lighthouse beacon as your nightlight. There are more than 30 lighthouses in the Windjammer’s cruising grounds, from Mt. Desert Light and Saddleback Ledge, built in the 1830s, to Pemaquid Point, showcased on the backside of the Maine quarter. At night, you’ll anchor under the stars in the calm waters of Pulpit Harbor on North Haven or perhaps Islesboro’s Dark Harbor. Longer trips might stop under the cliffs of Acadia National Park. There’s no better way to see Cadillac Mountain in the summer than from the water, far away from the maddening crowds. Indeed, the fleet could be scattered anywhere from Boothbay Harbor to Bar Harbor.
All of the Captains have favorite anchorages. The Lewis R. French’s Captain Garth Wells looks forward to going to Burnt Coat Harbor on Swan’s Island. “I enjoy talking a walk out to the lighthouse. It’s cozy, protected and I love showing people an island where a year-round population lives,” says Wells. Captain Noah Barnes aboard the Stephen Taber loves pulling into the harbor of Somesville on Mount Desert Island, part of Acadia National Park. “To get to Somesville, you have to sail up a fjord and when you get there you feel as though you’ve shown your guests something extraordinary. By the time we get there, we’re pulling in at sunset and it’s just breathtaking,” notes Barnes. Captain Dennis Gallant, at the helm of Angelique, savors Winter Harbor on the island of Vinalhaven. “It’s stunningly beautiful, quiet, peaceful and off-the-beaten path,” says Gallant.
I don’t want to share all their secrets. You’ll simply have to book a cruise and see for yourself.