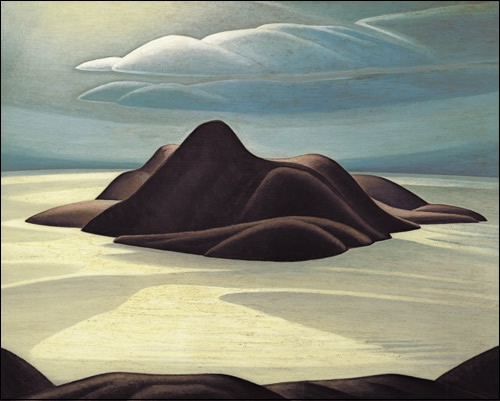 When the actor Steve Martin first viewed a painting by Lawren Harris, he mistook it for a work by Rockwell Kent.

“I thought it was the best Rockwell Kent I’ve ever seen,” says Martin, punctuated by his legendary laugh. “It was breathtaking.”
That was over 20 years ago and soon Martin was in the home of longtime Harris collector, Ken Thomson, purchasing several of his canvases. When Ann Philbin, director of the Hammer Museum in Los Angeles, saw these paintings at Martin’s house during dinner one evening, she came up with a “wild and crazy” idea. Showcase the mid-career paintings of Lawren Harris and allow America’s version of a modern-day Renaissance Man, Steve Martin, the opportunity to curate the show. The result is “The Idea of North: The Paintings of Lawren Harris,” on view at the Museum of Fine Arts, Boston though June 12 after a successful run at the Hammer Museum. The exhibition will next travel to Toronto’s Art Gallery of Ontario in July and afterwards return the majority of these works back to the their respective Canadian institutions in time for the country’s 150th anniversary celebration in 2017.
To read my review of the Lawren Harris show at the MFA, please see the latest issue of Everett Potter’s Travel Report.