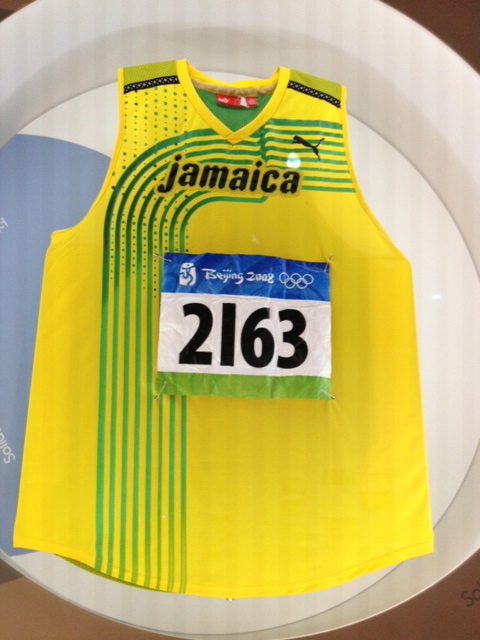 For a city of only 140,000, Lausanne is blessed with 22 museums. Actually 23 museums if you count the archaeologist I met yesterday who opened a one-room museum devoted to the history of shoes, including her recreation of a Neolithic shoe. Home to the International Olympic Committee or IOC, Lausanne’s best known museum is the Olympic Museum, now double in size after a two-year renovation. The three-floor display first looks at the pageantry of the Olympic Games, displaying every torch used since 1896 and showcasing the elaborate structures cities created to constantly up the ante, like the Bird’s Nest Stadium built for the Beijing games. The second floor was my favorite, showing memorabilia from the games, like Jesse Owens running shoes from the ‘36 Games in Berlin, Michael Phelps swimsuit, Sergey Bubka’s pole vault, goalie Jim Craig’s jersey from the 1980 “Miracle on Ice” game, Roger Federer’s racquet, Usain Bolt’s jersey, and Michael Johnson’s gold sneakers. The last floor, you can try your hand at shooting a gun in the biathlon, see the medals awarded at every Olympics (the Vancouver Winter Games medal were very stylish), and stand on the podium from the Sydney Games.
There are two other museums in town that should not be missed. Collection de L’Art Brut is an art museum that rose to prominence from artist Jean Dubuffet’s wildly imaginative collection of art from outside the mainstream. Searching for purity in art, he collected naïve works, primitive works, and simply works by the insane or incarcerated. Many of the bios start the same way—said artist was abandoned by his father, raised in poverty by his mother, and ended up in a mental institution. The works are fascinating, like the whimsical paintings of the Lausanne-born artist, Aloïse, who imagined she was having an affair with an emperor. She would use rose petals, toothpaste, and crushed leaves to create her pairs of lovers. Pascal-Désir Maisonneuve would create masks entirely from shells. Other works are so detail oriented like the paintings of Augustin Lesage that it wasn’t much a stretch to think of the artist as mad.
We were fortunate to be in Lausanne during their annual Night of Museums, when all the museums in town stay open until 1 am and folks crowd the streets strolling from museum to museum. We took advantage of the opportunity to visit the Fondation de l’Hermitage, a 19th-century estate on a hillside above town (not far from Coco Chanel’s and David Bowie’s former home) that specializes in 19th-century art. We toured the museum’s collection of European art, including works by Degas and Caillebotte, then entered a special exhibition on 19th-century American art, like the Hudson River School painters and the Luminists. Outside, the American theme continued as a DJ played old-school hip-hop like Grandmaster Flash and people danced. The museum was packed both inside and I was delighted to see numerous families checking out art until the wee hours of the morning. I would love my hometown of Boston to host a similar type of event!