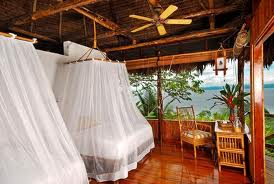 At the southernmost coast of that ecotourism hub, Costa Rica, a 1040-acre rainforest called the Lapa Rios preserve perches over the Pacific Ocean, offering the best of both worlds. You can spend the morning hiking along the Carbonera River to a pristine waterfall, accompanied by four types of monkeys, macaws, and those rainbow-colored toucans. In the afternoon, sea kayak in the ocean around Matapalo Point or surf the Golfo Dulce. The 16 open-air bungalows and main lodge of the Lapa Rios Ecolodge are no tent-in-the-woods accommodation. Hardwood floors, bamboo walls, and a vaulted thatched roof ceiling provide plenty of space and privacy. Other luxuries include soft mosquito netting over the queen-sized bed and a secluded garden shower.
Former Peace Corp volunteers Karen and John Lewis built the retreat in 1990 as a way to save hundreds of acres of rainforest from farming. The owners have just signed a conservation easement that protects over 900 acres of land surrounding Lapa Rios in perpetuity. It prohibits all extractive activities, such as mining, forestry and hunting, as well as further building expansion, even putting a cap on trail construction. At the same time the easement encourages both scientific and educational activities on the reserve. All those monkeys and birds that wake you up in the morning are a tribute to their brilliant success.