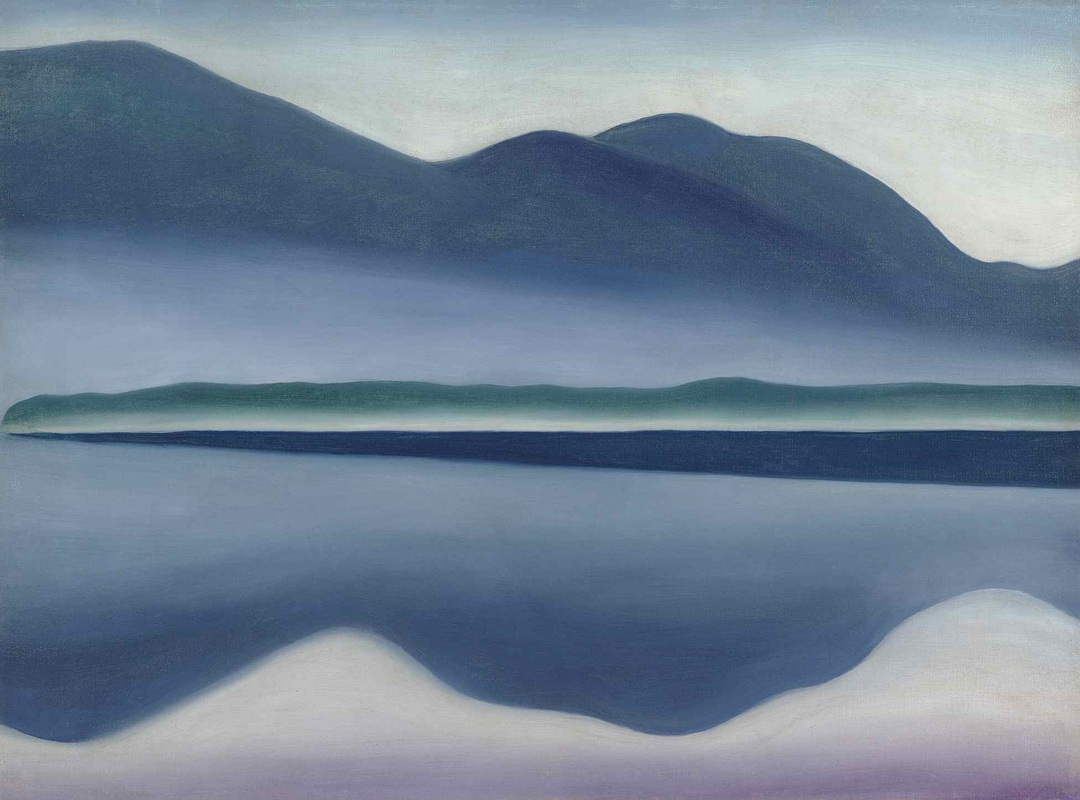 In the mid-90s, I was hired by Art & Antiques Magazine to write a story on the period of time painter Georgia O’Keeffe and her husband, photographer Alfred Stieglitz, lived on the shores of Lake George. This was to coincide with a photography exhibition of Stieglitz’s work at New York’s Museum of Modern Art. I knew renowned abstract sculptor David Smith lived in Bolton Landing, but I honestly had no idea O’Keeffe lived in Lake George, since she’s far better known for her New Mexican motif. From 1918 to 1934, O’Keeffe would spend a good portion of her summer at the lake. She would return to Lake George for the last time in 1946 to spread Stieglitz’s ashes at the foot of a pine tree on the shores of the lake. Today, those ashes lie on the grounds of the Tahoe Motel. Next door, the house they lived in, Oaklawn, is still standing at The Quarters of the Four Seasons Inn. On a wall next to my desk, I have a poster of a dreamy mountain and lake landscape simply titled Lake George (1922). My brother, Jim, purchased this for me at the San Francisco Museum of Art, where the original O’Keeffe oil still hangs.

O’Keeffe wasn’t the only artist inspired by the majestic Lake George landscape. In the 1860s, most of the noteworthy Hudson River School painters, including Thomas Cole and Jasper Cropsey, descended on the shores of the lake to put oil to canvas. Exquisite works by 19th-century American landscape painters like Albert Bierstadt and William Merritt Chase can be found at the Hyde Collection, a gem of a museum in nearby Glens Falls. I returned to the Italian Renaissance-style villa yesterday, only to be blown away once again by the bounty of impressive works that include paintings by Rembrandt, Botticelli, Raphael, El Greco, Rubens, Renoir, and Picasso.
A special treat was an exhibition on contemporary sculptor Larry Kagan. Kagan twists tubes of steel into abstract shapes that, when illuminated, project shadows on the wall into images of a bald eagle or a stilletto. I love the images that pay homage to artists Andy Warhol and Keith Herring. Bring the kids–this is an exhibition for all ages to enjoy. Much has been made about the reopening of the Clark Art Institute this summer in nearby Williamstown, Massachusetts. Art lovers should make one additional stop to tour the Hyde. You’ll be happy I sent you!