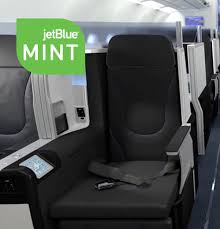 JetBlue’s version of Business Class, Mint, already popular in New York, will make its debut at Logan Airport at the end of this month. Starting on March 24th, the airline will introduce Mint service to San Francisco and two days later will offer Mint flights to Barbados. In October, Jet Blue will be adding Mint service to LA flights. Mint offers 16 lie-flat seats in the front of the cabin, four of which are suites with the option to close your door for more privacy. Lie-flat seats include a massage feature and a button that can adjust cushion firmness. You can access more than 100 channels through DirecTV and SiriusXM, and the plane’s FlyFi broadband connection promises a fast Internet. Meals were created by the New York City restaurant Saxon + Parole and include dishes like herb-roasted monkfish, poached lobster with corn custard, and bison meatloaf. A signature Mint cocktail is made with Grey Goose, and the wine selection includes roses and California varietals. Each Mint passenger will also receive a complimentary Birchbox, an amenity kit filled with moisturizer, soap, and other goodies. Seats on the San Fran flight start at $599 one-way. Logan passengers should also be on the lookout for new JetBlue flights to Nashville and Salt Lake City starting in May.