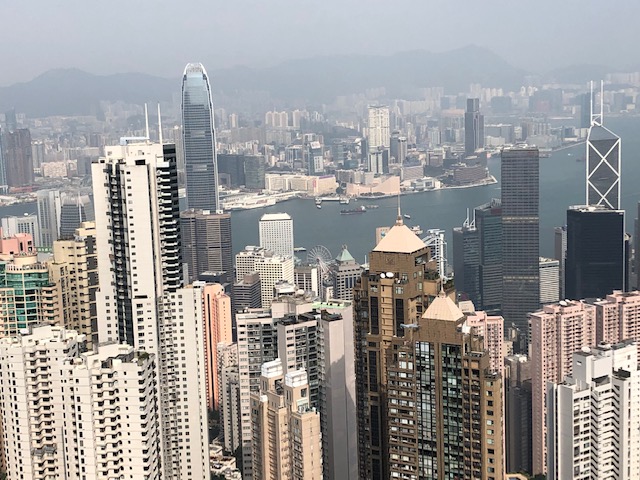 The concierge we dealt with at the Intercontinental was exceptional, not only providing us with authentic Chinese restaurants to visit, but finding a sports bar to watch the New England Patriots playoff game. We wandered over to an Irish pub called Delaney’s at 8 am, only to find the place packed with American expats. Three hours later, we wandered out of there elated after a stirring victory onto the busy streets of Kowloon, a bit of a culture shock. We took the historic Star Ferry over to the Hong Kong section of the city after making an essential stop at the ferry terminal to talk to someone at the Hong Kong Tourism Board Visitors Center. They provided a walking map to hike up to the top of Victoria Peak. Seemed easy enough, but we had no idea how steep the trail is. On a series of switchbacks on a narrow concrete path that starts to the left of the Victoria Peak tram, we snaked up the hillside past the tall apartment buildings and residential neighborhoods. Close to the top, we spotted a pair of wild boar nibbling at the scrub, which seemed apropos since the Chinese New Year is celebrating the Year of the Pig. We would later learn that the wild boars are overrunning the island and becoming a bit of a problem. One hour later, we made it to the top of the funicular to a viewpoint that offered a spectacular vista of the city skyline, surrounding waters, and neighboring islands below. We then celebrated our achievement over pizza and German beer at a place called Wildfire, before happily taking the funicular back down.