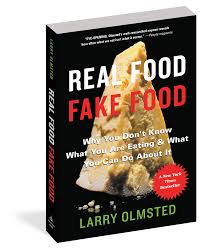 In 2012, Boston, a city that prides itself on its fresh seafood was rocked to its ocean-loving core when a two-part expose published by the Boston Globe revealed that a significant number of fish were mislabeled at area restaurants, grocery stores, and fish markets. Diners were served cheap Vietnamese catfish instead of the succulent and more expensive grouper, haddock instead of cod, tilapia in place of pricey red snapper. Indeed, 24 of the 26 red snapper samples tested were some other species of fish. The two reporters went on a fish collecting spree, sending samples of their findings to a laboratory in Canada for DNA testing. The outcome? A whopping 48 percent of the seafood was mislabeled. In his latest book, Real Food Fake Food, writer and friend Larry Olmsted delves much deeper, telling us that that most kobe beef sold at restaurants is indeed wagyu; extra virgin olive oil is rarely that, usually cut with soybean and peanut oil; grated parmesan is almost always fake; and that grass-fed beef was probably drugged and raised in a crowded feedlot. It’s no surprise this book already made many “notable books of the year” lists. For anyone who wants to start off 2018 on the right foot, grab a copy and then buy that olive oil from a trusted supplier Olmsted recommends, like Oliviers & Co. One taste of their olive oil and you’ll never go back to the fake stuff again.

Have a Happy Thanksgiving!