Holiday Stocking Stuffer No. 2, Beyond the Craft 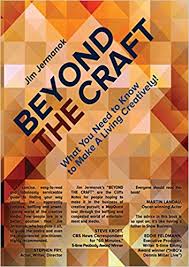 Having sat next to my brother at a number of his workshops, including stops at Harvard and the Seattle Film Festival, I know firsthand how incredibly inspirational and motivational his talks can be. Jim’s already worn so many hats in the entertainment world—talent agent to stars like Alan Arkin and Helen Hayes, screenwriter, director, documentarian, award-winning producer—and known so much talent that have succeeded beyond their wildest dreams and others that have failed miserably. In fact, he’s distinctly qualified to understand and analyze why some people can make a good living pursuing their creative ambitions and others stuff those dreams away in a dimly lit office far from their film, art, or journalism schools. Take it from a guy who’s worked as a full-time freelance travel writer and screenwriter for the past 25 years, Spielberg is not going to call on line one and you’ll be marketing far more than you’ll be writing.

Fortunately Jim has organized all of his thoughts and anecdotes into one book, Beyond The Craft. Not only will you learn how to network effectively, creating a detailed marketing plan of follow-up phone calls, but you’ll understand the necessity of knowing everything about the business side, most importantly who are the players who can hire you or show your wares. Jim also delves into the psychological aspects of dealing with rejection and the importance of surrounding yourself with incredibly supportive friends. He’s literally been all over the world delivering his seminar on How to Live a Creative Life. In fact, Jim just returned from Dublin, London, and Paris teaching filmmakers and writers on how best to make their voices and visions shine. Beyond the Craft should be mandatory reading at every film and art school across the nation, a pragmatic step-by-step guide to making your dreams a reality.