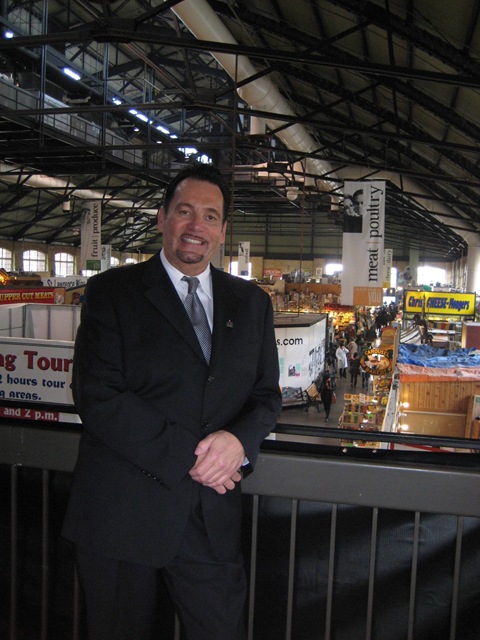 There’s no better way to see a city then with a local, and if that person has to be a passionate historian, then you’ve hit the jackpot. Yesterday morning I had the pleasure of going on a 90-minute tour of the St. Lawrence Market with Bruce Bell, the same Bruce Bell that’s responsible for placing 100 plaques around the city detailing the most historic moments in Toronto. Bell met me at the St. Lawrence Market, where the city of York originated. Walk inside the thriving food market and you can still see the façade of the first city hall, occupying this site since 1854. I’ve always loved a good market and the St. Lawrence has such a rich history that it’s no wonder National Geographic recently called it the number one food market in the world.

Start with a local classic, the peameal bacon sandwich at Carousel Bakery, the same Canadian bacon sandwich Anthony Bourdain raved about on his show. Also ask for a butter tart, an old French Canadian recipe that tastes like pecan pie. Except for the camel, crocodile, and kangaroo meat sold at Whitehouse Meats, much of the produce is local. This includes a large selection of cheeses and wines from nearby Niagara-on-the-Lake. Downstairs in the market, you’ll find more ethnic fare, like the pierogies, latkes, knishes, and blintzes at European Delight. Work off your meal by visiting other Old Town Toronto sites with Bell like St. Lawrence Hall and St. James Cathedral. Making its debut in 1850, St. Lawrence Hall is where P.T. Barnum introduced Canadian audiences to his pint-sized performer, Tom Thumb, and to the great Swedish soprano, Jenny Lind. Also on the wall of fame is a photo of a younger Bruce Bell. He’s a local treasure and well worth the 25 bucks for an engaging trip to the birthplace of Toronto.

One comment on “Holiday Cheer in Toronto—Visiting the St. Lawrence Market with Toronto Historian, Bruce Bell”