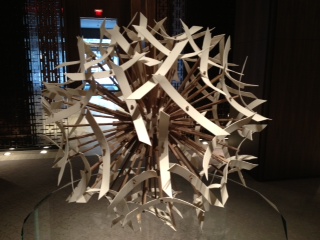 On the heels of Toronto’s architectural achievements came a slew of high-end hoteliers. In February 2011, the Ritz-Carlton opened its first property in Canada, a 53-story high-rise overlooking the CN Tower in the entertainment district. This past January, the $500 million Trump Tower was unveiled. In September, Shangri-La, the Asian-based luxury hotel group, opened its second hotel in North America. And last, but certainly not least, the Four Seasons just debuted their new flagship property in one of the liveliest sections of town, Yorkville.
The demand is obviously here, with Tourism Toronto reporting a banner year in 2011, with more than 9 million hotel rooms sold. But what I love about each one of these properties is their utter lack of pretension (c’mon, this is Canada), excellent service, and unique features. The Ritz-Carlton offers diners at the restaurant, Toca, a chance to visit the cheese cave and sample more than 200 cheeses. Also those hand-painted plates, which pay homage to the Toronto International Film Festival and the Canadian landscape, were created by one of the servers. At Trump’s expansion of the Quartz Crystal Spa, you’ll find a heated saltwater lap pool. The most welcoming lobby is at the Shangri-La, where you can recline on a cushiony couch in front of the fireplace. Then there’s the Four Seasons, whose properties I’ve always cherished simply because their fitness rooms and men’s spa were light years ahead of the competition. At Four Seasons Toronto, they have equipped their treadmills, elliptical machines, and bikes with a Virtual Active by Matrix. It’s basically a virtual reality system where you can choose to take a run through the streets of Chicago, the lush interior of Hawaii, or in the Swiss Alps. It’s already been filmed! Forget the Duck Egg dish at the new Café Boulud (which was delicious, by the way), I’d return to Four Seasons Toronto solely for the chance to sweat all over the world.