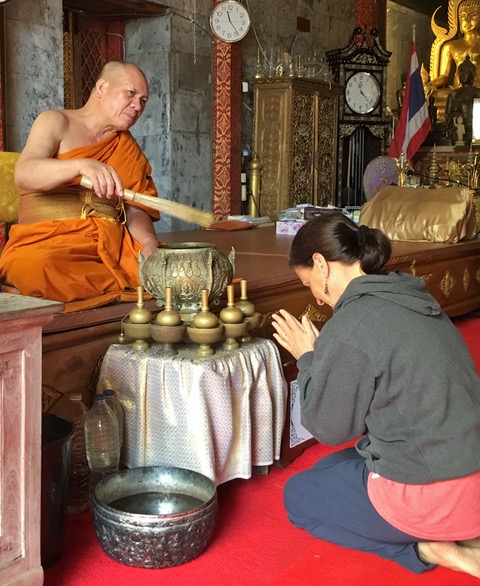 Midway into our journey from Chiang Rai to Chiang Mai (a 4-5 hour drive), we stopped for a breather at the humorously named Cabbages and Condoms, which is, unbeknownst to me, a thriving chain of inns and restaurants in Thailand and the UK  — where all profits support the The Population & Community Development Association (PDA) and its programs in primary health, education, HIV/AIDS, family planning, rural development, and the environment. The restaurant started as a small vegetable stand on PDA office premises where the vegetables, along with condoms and oral contraceptives, were sold to the local residents. Of course, I bought a T shirt. It’s a good cause, and good for a chuckle back home.
Other highlights of my trip to Chiang Mai:
I love learning new things, and "Monk Chat" at Wat Suandok was right up my alley, arranged by my guide Oy. I spoke directly to Phra KK, a monk for the past 18 years (since he was 13). Rather than being hokey or awkward, it was genuine and open. Phra KK explained that Monk Chat is a way for monks to give correct information on Thai Buddhism, which was much appreciated. He explained that Buddhism is not a religion per se, but a way of living and of understanding life; there are 227 precepts by which to do so. It is not a centralized belief system based on a god or set of gods. I asked, so, you could be another religion and also a Buddhist? And he said, "Like a Jew Bu? Sure!" He also explained when it is acceptable to break one of the precepts, and what followed was a great digression into when monks take "Western" antibiotics. Ask me sometime.
Again, with Oy at my side, I set out for an Anthony Bourdain-styled breakfast at the Chiang Mai Gate Market early one morning. Over the course of 2 hours, I ate and ate and ate! Bamboo stuffed with coconut and peanut sticky rice. Sticky rice with tea leaf. Rice noodles, broth, pork, and tomatoes.  Water buffalo rind. BBQ pork stick. Banana leaf with coconut cream sticky rice and banana. Sticky rice with catfish. Sticky rice with fried garlic, sugar, and dried fish. Sticky rice with sesame and salt. And, at the end, Thai coffee (made with condensed milk). I didn’t eat the ant egg delicacies (too expensive!), or the grilled frog, but my taste buds and appetite for exploring and eating were sated.
Also great in Chiang Mai: