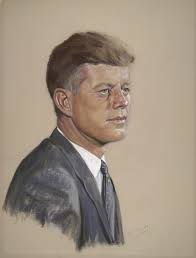 May 29th marks the 100th birthday of John F. Kennedy. To commemorate the occasion, The National Portrait Gallery is displaying photographs from his life in a gem of show simply titled, “Celebrate: John F. Kennedy.” 72 portraits from the museum’s collection are on view through July 9 including a wonderful pastel by Shirley Seltzer Cooper. You’ll see well-known images of JFK holding John John’s hand in the White House along with rarely seen early shots of Jackie and JFK dating.
As if you needed another reason to visit the National Portrait Gallery, one of my requisite stops every time I visit DC. Home to the official portrait of every president, Nixon never looked so good in a painting by Norman Rockwell and Bill Clinton never looked so bad in a painting by Chuck Close. The building also houses the Smithsonian Collection of American Art, which includes epic-sized works by Albert Bierstadt, Frederick Church (a marvelous depiction of the Northern Lights) and Thomas Hart Benton. Afterwards, grab a latte and rest your weary feet in the courtyard.
John F. Kennedy (1961), by Shirley Seltzer Cooper