Greece Week with Heritage Tours: Boating to Delos and Paros 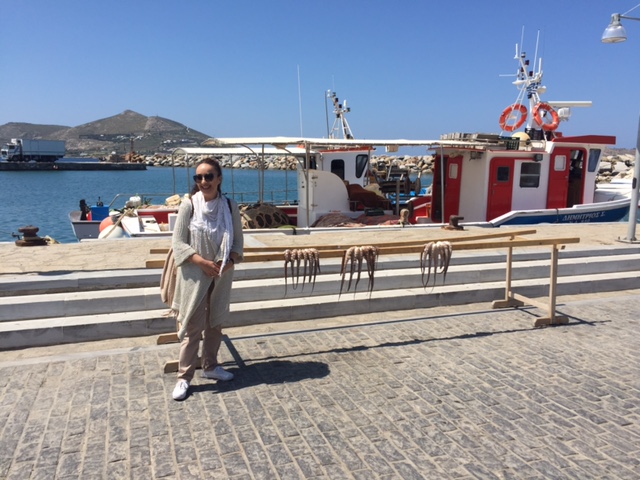 The main town in Mykonos can be swarming with people in the daytime when thousands of passengers from cruise ships disembark. The reason why we recommend clients staying on the island visit the town at night for dinner and shopping. All the stores are open late and the cruise ship passengers have departed. It’s best to hit one of the majestic Mykonos beaches during the day or take a private boat like we did with Heritage Tours to the neighboring islands of Delos and Paros. The birthplace of Apollo and Artemis, Delos was a thriving community in ancient Greece. You can still walk the narrow cobblestone passageways (not unlike Mykonos today) and see the remnants of homes, temples of worship, even a synagogue.

We continued on to the island of Paros, a highlight of the week. Unlike Mykonos and Santorini, which can be swarming with travelers due to its justified popularity, Paros has no cruise ships descending on the island and retains that authentic Greek charm. Fishermen return from their morning at sea to dry their octopus and fish on the docks. We tasted their wares at Barbarossa restaurant near the docks for lunch before roaming around the towns of Naoussa and Parikia to look at the artisanal shops and whitewashed homes. Parakia is also home to a wonderful church, The Monastery of Panagia Ekatontapiliani, first built by Constantine in 4th century AD before being updated by Emperor Justinian in the 6th century. It has a similar dome to Istanbul’s Hagia Sophia, which was built during the same time period. Evidently Constantine’s mother was shipwrecked in Paros on her way to Israel so her devoted son decided to build her mother a church in her name. I’d like to be shipwrecked in Paros for several weeks, preferably in a villa with my extended family. These are the Greek islands you dream about.