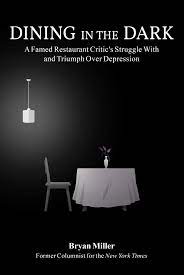 When I first moved to Manhattan in the late 80s, there was only one name associated with food reviews, New York Times restaurant critic Bryan Miller. A friend of my brother, Jim, I had the good fortune to participate in a handful of his restaurant reviews and marveled at his ability to down copious amounts of wine and food and not scribble one note, only to write an insightful and witty column about that restaurant the next day. His jovial personality was infectious, full of humor and intelligent conversation. So it came as a shock to me that this bright light of a man also suffered from depression as a result of being bipolar. His struggles would shorten his tenure at the Times, but thankfully he continues to write. In his latest book out today, Dining in the Dark: A Famed Restaurant Critic’s Struggle with and Triumph Over Depression, Miller details how he coped with the highs and lows of being bipolar, bringing his keen insight, inspiration, and that buoyant sense of humor along for the ride. The obvious comparison is Anthony Bourdain, who sadly succumbed to depression while having the palm of the world in his hand. Thankfully, one of the food world’s most beloved writers is still with us to tell his story.