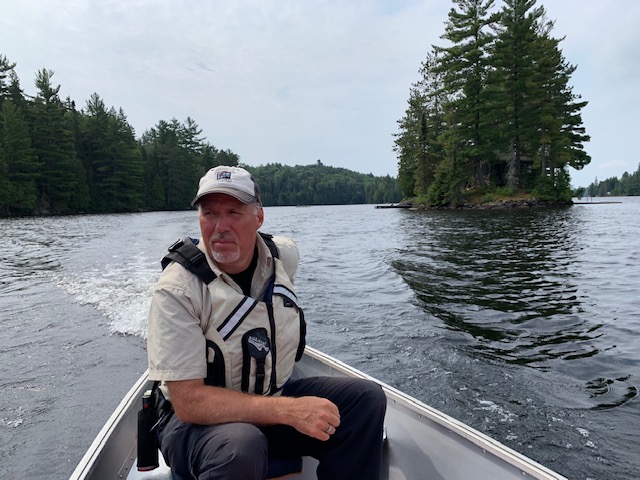 On our first day at Bartlett Lodge, we signed up for a Tom Thomson tour with our guide, Malcolm. Tom Thomson was arguably Canada’s first iconic painter, sketching lone birches and pines swaying in the wind on the shores of Algonquin’s many lakes. While not technically a member of Canada’s Group of Seven artists, he was good friends with many in the group and would have certainly been a member if he had not died under mysterious circumstances at Algonquin in 1917. Thomson would spend a good 5-year span at Algonquin before his untimely death and Malcolm did a thorough job showing us the many sites where his paintings were created. We started at Tea Lake Dam, where Thomson first camped in the area along a babbling brook. Thomson was also known as an accomplished angler and paddler and you can easily see him living happily on the water’s edge here. It helped that Malcolm brought along a laptop to show us the sketches that were created in this exact spot and many other locales we would visit that day.

The bulk of our time was spent on Canoe Lake, the busiest part of Algonquin, and where they serve a Tom Thomson burger at the Visitor Center. We took “Winnie the Tinnie,” a motorized canoe around the entirety of the lake, passing celebrated Canadian overnight summer camps, like Camp Ahmek, where Prime Minister Justin Trudeau was both a camper and counselor. At Hayhurst Point, we docked and walked up a small hillside to see a plaque that Group of Seven artist, J.E.H. MacDonald, created in memory of his friend. No one is certain how Thomson died, but his canoe arrived back to the shores first, and soon his body was found in the waters. It was ruled an accident, but there were some unruly characters living in the park in those early years, and many still believe he was murdered. Malcolm showed us the sight where his body was found and the small cemetery where he is now buried (another controversy since some people think his body was taken), before we headed back under heavy rains. The heavyu drops splashed off the water of the lake, creating a pointillist canvas that Thomson would have appreciated.