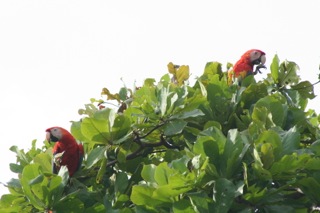 My kids weren’t too pleased to wake up at 6:30 am on spring break, but I wanted to be at Carara National Park at 7 am when it opened. I knew from prior trips to the country that Carara was one of the few places to see that majestic bird, the scarlet macaw. Last time here, I heard the loud squawking and peered up at a family of four vibrantly colored macaws. That is an image I was hoping to recreate as we started our hike in. An hour later, we were covered in sweat from the sweltering rainforest humidity and had only spotted one very large Jesus Christ lizard. No macaws. We drove back to the hotel and I was bumming big time. Later that afternoon, we were driving south on the coastal road outside of Jaco to our next stop, Manuel Antonio National Park. Out of nowhere, I heard that unmistakable loud squawking and suddenly seven to eight large macaws flew overhead, only to land in an almond tree to our right. I stepped on the brake and pulled over, upsetting the truck behind us who was honking. As he drove by, he swore at me in Spanish, which fortunately I can barely understand. I could care less. My wife and kids were in their glory taking snapshots of the multicolored macaws. It made my trip.