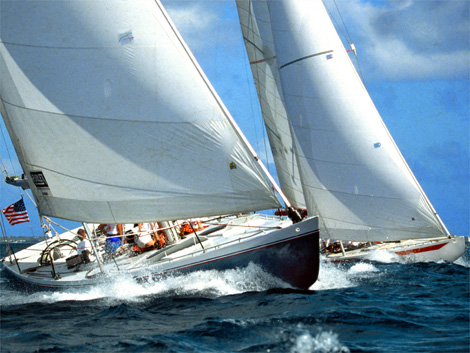 One of the most unique opportunities in the Caribbean is the chance to race aboard authentic America’s Cup yachts used in the actual competition. In the three-hour sailing fantasy camp called the Sint Maarten 12 Metre Challenge, you have the rare opportunity to step into Dennis Conner’s soft-soled shoes. After an introductory talk about the history of the America’s Cup, four captains choose teams and off you go to your respective boats. The boats include the winning Stars & Stripes yacht which Connor used in the 1987 America’s Cup in Fremantle, Australia; his back-up, Stars & Stripes ’86; and two Canadian yachts, Canada II and True North IV. Once aboard your boat, the captain designates crew assignments. You could be chosen to be a primary grinder (grinding a winch as fast as possible so that the foresail can change direction), timekeeper, or handler of the mainsheet or rope. Simulating the America’s Cup, you sail against one other yacht around a triangular course, about one-tenth the size of the actual race. Afterwards, you’ve earned your rum punch.