First Stop on My Trip to Southeast Asia: Bangkok 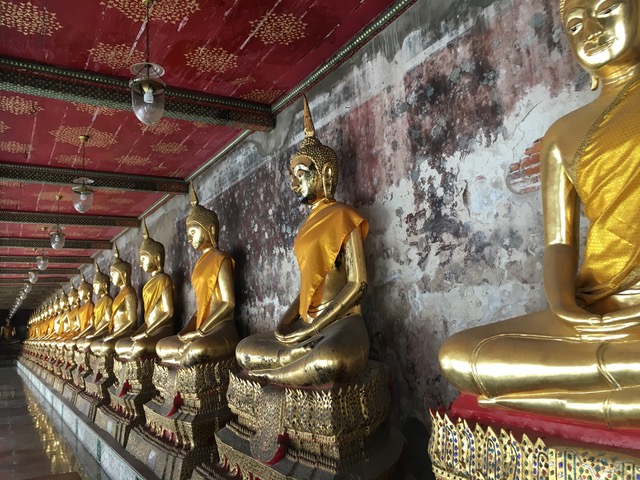 Guest Post and Photo by Amy Perry Basseches
"Southeast Asia has a real grip on me. From the very first time I went there, it was a fulfillment of my childhood fantasies of the way travel should be."
Anthony Bourdain
With this quote in mind, and Bourdain’s 2001 "A Cook’s Tour" in my backpack for inspiration, I set off on my first foray to Southeast Asia. Would I too feel my travel fantasies fulfilled? My son Jake had spent 3 weeks in Thailand, Cambodia, and Laos during the summer of 2016; I was eager to follow in his footsteps.
Bangkok is a bustling city, full of travelers from all over the world. I stayed in a hotel overlooking the Chao Phraya river, and savored my activities while moving in step with millions of others. With my guide Kim, early on Sunday morning, I set off for Wat Pho and Wat Arun, two of the famous temples in Bangkok. Wat Pho is home to the 46 meters-long "Reclining Buddha," and it is one of Thailand’s oldest temples (built in the 16th century). While there, I saw a classical Thai dance lesson being taught. On Sunday mornings, Kim said, classes are offered free to local schoolchildren. We then crossed the river to Wat Arun, considered by many as one of the most beautiful temples in Thailand. Climbing up high, and looking back toward the river, was a highlight for me.
The next day, our entire group visited the Grand Palace, an over 50-acre complex of buildings, the official residence of the Kings of Siam since 1782. Signs are everywhere, stating: "Buddha is not for decoration. Respect is common sense." This is especially noticeable outside the famous Temple of the Emerald Buddha, where people throng, a few of them tattooed with, you guessed it, images of Buddha. Sigh.