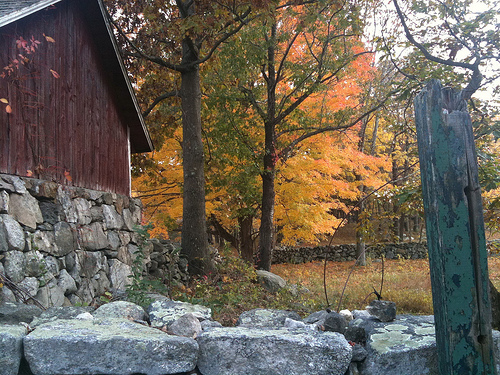 Sort of ironic that the only time I’ve ever been published in National Parks Magazine, the National Parks are closed due to a government shutdown. When congress gets their act together, be sure to visit the 60-acre Weir Farm National Historic Site. This serene pastoral setting in southeastern Connecticut, an hour’s drive from Manhattan, is home to the only national park unit devoted to American painting. Century-old barns and a homestead still stand, stone walls are built around fields of swaying grass, and a large pond is lost in a canopy of tall maples and birches. They would become the fodder for J. Alden Weir’s ambitious body of work. Weir’s early paintings reflect an appreciation for the scenery of rural life—dogs sleeping in the tall grass, his wife Anna sitting on the steps that lead to the house. By the latter half of the 1880s, he began to show an interest in painting landscapes, possibly due to the influence of his friends and fellow painters, Childe Hassam and John Twachtman, who often visited the farm to fish and paint the grounds. These weren’t the grand theatrical landscapes of his American predecessors, Thomas Cole and Frederick Church, but intimate portrayals of pasture, thickets of trees, barns, and meandering stone walls. Have a look and don’t forget the sketchbook.