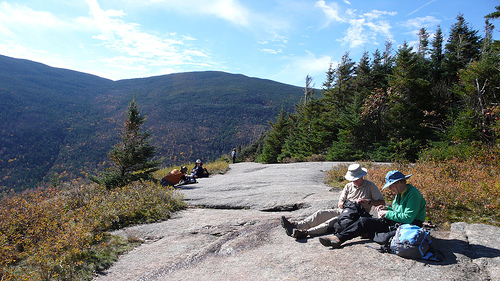 If the thought of climbing a mountain makes you sweat long before leaving your car, wipe your brow and give 2,804-foot Willard a try. In less than an hour, you’ll make it to the peak where jaw-dropping views of Crawford Notch stand below you, a reward for your slight efforts. The hike begins behind the Crawford Notch Visitor Center, former site of the Crawford railroad station. The trail starts off sharply but becomes more gradual as you crisscross through a forest of dense pines. Eventually, sunshine seeps into the woods and you’ll reach a large opening, the light at the end of the tunnel. Look down from the rocky ledge at the old railroad line, carved into the mountainside, and the onslaught of cars that snake through Crawford Notch on Route 302. Then pat yourself on the back for climbing a White Mountain.