Ecuador, So Much More Than the Galapagos! Great Activities Within an Hour of Quito 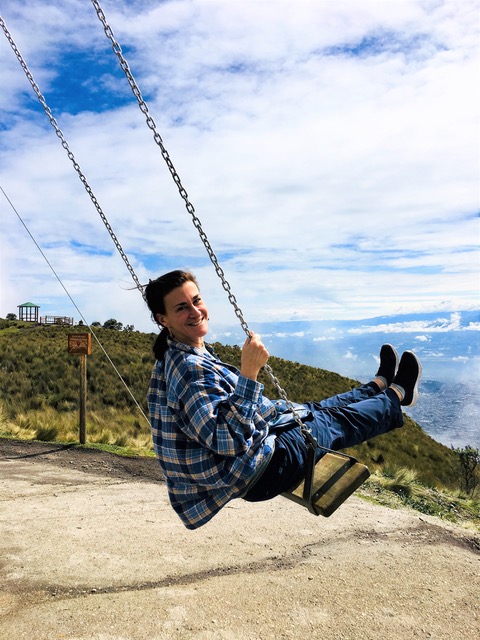 To reinforce yesterday’s recommendation to add at least 3 or 4 days to a Galapagos trip in the highlands region of Ecuador, here are three wonderful activities I did just outside of Quito.
Definitely don’t miss the ½ hour side-trip to the base of the Teleferico Gondola. The view, as you ascend the east side of the Pichincha Volcano to lookout point Cruz Loma, reveals a unique landscape of the city and the opportunity to travel more than 8,000 feet in less than 20 minutes. Once there, you can spend a few hours or a few days! Options abound: hiking to the summit of Pichincha, camping, horseback riding, mountain biking, rock climbing, and even paragliding. Of course, you could just sit with a picnic and take in the vista, including the world’s highest Catholic Church. I loved swinging on the giant swing.
Another lovely place for outdoor activity is the Pululahua Geobotanical Reserve, less than an hour’s drive from downtown Quito. Lush green farmland has developed in the crater of the inactive volcano, the only such agricultural area in the world (growing maize, beans, potatoes, vegetables, alfalfa, and more, for 500 years). Side note: In Ecuador, there are 18 varieties of bananas, 137 varieties of corn, and 300 varieties of potatoes! From the top of Pululahua, you can take it in, or, if so inclined, hike down. Horseback riding, hiking, birding, and mountain biking are the most popular activities inside the volcano trails. There’s even an ecolodge using renewable energy inside the 2500 year-old crater.
And, of course, you can’t go to Ecuador without straddling the equator. There are not one, but two competing equator sites close to Quito. Most people apparently know that Mitad del Mundo’s equator line is a bit off. Intiñan Solar Museum has its own marker, which is closer to the right spot. It’s hard to know if either is 100% accurate, but locals claim that Intiñan is more "real." They are only a few hundred yards from one another, so you can easily see both sites. Interestingly, science experiments like the Coriolis effect (where water swirls down a drain clockwise on one side of the equator, and counter-clockwise on the other) work at both.
Tomorrow, Otavalo, South America’s most famous market, where indigenous locals come from the surrounding villages to sell their colorful handicrafts and produce.