Dreaming of the Tbilisi/Baku/Samarkand Combo 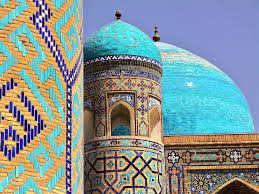 I had the good fortune to sit next to Natalia Odinochkina, General Manager of Abercrombie & Kent’s Russian office, at dinner in Boston Tuesday night. She was a wealth of information. First of all, contrary to what you might think, the numbers of Americans traveling to Russia are way up. Not only are they visiting the Hermitage in St. Petersburg, but they’re taking the 4-hour bullet train to Moscow to see the Red Square. Many want to stay at the Metropol, due to the popularity of the best-selling novel, A Gentleman in Moscow. Then we got to talking about the nearby countries of Azerbaijan, Georgia, and Uzbekistan, which she says is a must for any travel lover. Start in Tbilisi to hike in the 16,000-foot Caucasus Mountains and drink the exceptional local wine, then then take an hour flight or 7-hour drive to Baku to see the spectacular Zaha Hadid building and other architectural gems. From Baku, it’s about a 2 ½-hour flight to Tashkent and another 2-hour train ride to the ancient Silk Road gem of Samarkand, the entire city a UNESCO World Heritage Site. Another 2-hour train ride and you’re in the exemplary Medieval city of Bukhara. Give me two weeks of your time and ActiveTravels will be happy to design the entire trip.