Cross-Country Skiing to the Sugarhouse at Trapp Family Lodge 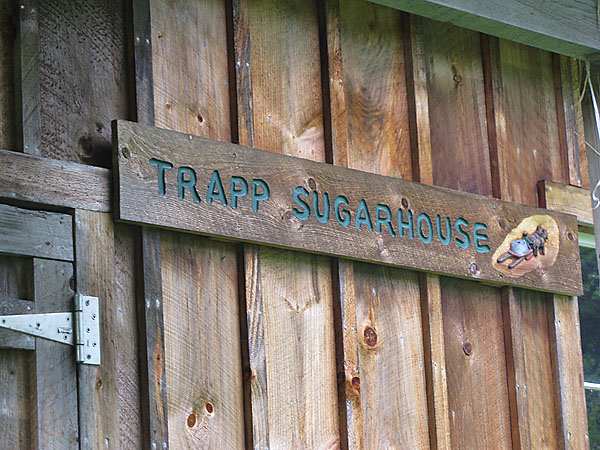 I used to hate March in New England, yet another month of harsh winter weather when I’m more than ready for spring. Now I’m excited when March rolls around because this is the time of the year that the Maples thaw, the sap pours, and maple syrup is made. Last March, I brought the family to Trapp Family Lodge and their fabulous network of cross-country trails in the hills above Stowe, Vermont. It was the first day of spring, but you wouldn’t know it at Stowe, with flurries falling and the conditions perfect for cross-country skiing on the groomed trails.

We took Sugar Road, where the tall pines and birches stand on the side of the trail like spectators at a marathon. At Picnic Knoll, we headed up the Parizo Trail, cutting our v-shaped wedges into the soft snow. Then we skied downhill on one of my favorite runs, the Old Country Road, before making a turn onto the Russel Knoll Trail and making our way to the Sugarhouse.
When it comes to sugaring, the von Trapps do it the old fashion way, picking up the sap in buckets with a horse-drawn sleigh and delivering it to the sugarhouse to boil off the water and create Vermont’s “liquid gold.” The 1200 taps produce 300 gallons of syrup annually and the season lasts until late April. Every Saturday during the sugaring season, you can cross-country ski, snowshoe, or grab that horse-drawn sleigh to the sugarhouse for a traditional Sugar-on-Snow party. We tasted the freshly made maple syrup while a Trapp employee explained how the process worked. Then we went back outside to pour the hot syrup on the white snow and create a chewy maple taffy, served with donuts and dill pickles. Talk about a sugar high!