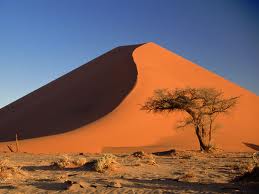 This past November, the travel world descended on Namibia for the annual Adventure Travel Trade Association (ATTA) conference. Jaded travel writers that I’ve known for years came back to the States raving about the destination. If you’re looking for a safari locale but don’t want to deal the hordes in the Maasai Mara, Serengeti, or Kruger, consider Namibia. On a 10-day to 2-week jaunt, you can track black rhinos, elephants, zebra, giraffes, leopards, lions, cheetahs, and spotted hyena on walking and jeep safaris in the Palmwag Reserve; marvel at Etosha National Park’s massive lunar-like mineral plane while on the lookout for impala, springboks, elephants, and zebra; step into a sea of red, mountain-high sand dunes in Sossusvlei; lunch at Walvis Bay alongside a flock of flamingos; cruise Namibia’s Atlantic coast, getting up close with Cape fur seals and dolphins; and drive along the game-rich Ugab riverbed past the second largest monolith on earth.