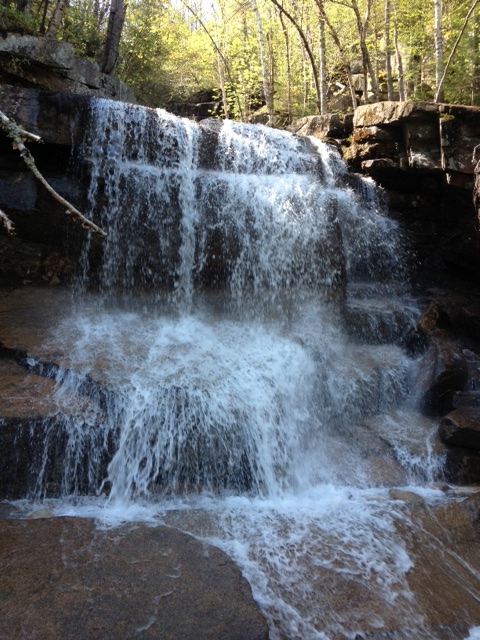 I spent Memorial Day Weekend in the White Mountains with family and friends, finally bagging Mount Chocorua. Standing 3,478-feet high, it doesn’t make the 4,000-foot club and therefore many avid climbers blow it off. They shouldn’t. This is a classic New England climb with an exquisite panorama of the southern Presidential range and enough granite to leave your quads burning by the end of the trek. We took the Champney Falls Trail, named after the artist who painted the distinctive rocky summit of this peak. Within an hour, we reached picturesque Champney Falls and watched the rushing water stream down a series of ledges. Two hours later, after scrambling through rock, we reached the summit, initially socked in a cloud. Once it started to clear up, we were treated to glorious views of the lakes and green valley below, the snow-covered trails of Mt. Washington in the distance.
Instead of staying in the honky-tonk town of North Conway, we chose the pastoral setting of the Snowvillage Inn in Eaton, with easy access to the Kancamagus Highway and Chocorua’s trailhead. The inn was just named in Yankee Magazine’s Best of New England issue for Best New Menu. Indeed, the food was excellent, from the fresh johns river oysters and lobster fettuccine we had at dinner to the blueberry pancakes, genuine maple syrup, and homemade sausage we had for breakfast (included in the room price). It was a treat to sit on the patio, look out past the apple trees to the peaks, and see hummingbirds dart in and out of the feeders. This is especially true when you have a can of Moat Mountain Iron Mike Pale Ale in your hand after climbing a White Mountain. Be on the lookout for my story in an upcoming Boston Globe travel issue.