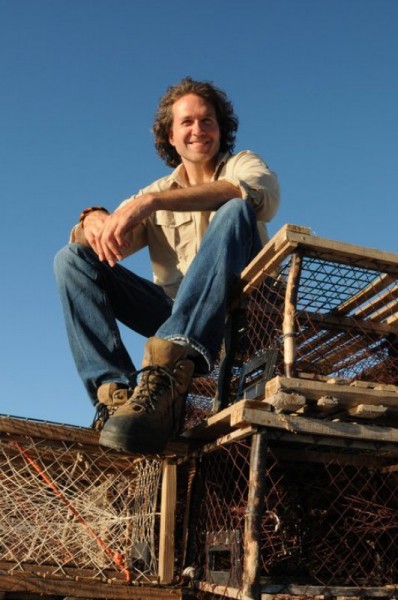 When I first ventured to the Inn at Bay Fortune on Prince Edward Island’s western shores, I arrived via kayak, courtesy of a four-day inn-to-inn sea kayaking jaunt. I paddled onto the grassy shores and walked across the sloping manicured lawn, getting my first glimpse of this grey-shingled estate and its Repunzel-like towers.  After washing the salt and rust colored sand from my body, I arrived for dinner expecting the usual PEI meal of lobster and mussels. Little did I realize that I was in for a culinary epiphany.
The first course was pan roasted oysters in a soothing soup, creamy but not overwhelmingly rich like chowder. Then came a salad of mixed greens where the waiter announced matter-of-factly that “everything is grown on the property, including the edible daisy.” A seared rainbow trout topped with tomato risotto and black olives was followed by the meat course, a roasted leg of lamb, butchered by the farmer down the road. Dessert was a peach, strawberry, and mint compote, made on premises, of course. Before calling for a wheelbarrow to be escorted out of the restaurant—after all, I spent the day paddling 8 miles along the island’s fabled red clay cliffs and the night feasting—I had to first meet this talented chef who shrewdly took advantage of all his homegrown goodies.
Standing tall in the kitchen was Michael Smith, a transplant from Manhattan who was once sous chef at Bouley, one of the few restaurants in the city awarded four stars (extraordinary) by the New York Times. When he left, his peers thought he fell off the map. Little did they know he was venturing to a farming and seafaring mecca.
The gregarious chef pointed to a large map of the island, dotted with more than 60 golden tacks. “These are all the fishermen and farmers around the island that we use to get our supplies,” says Smith, adding “when we don’t grow it ourselves.” Smith would go on to much acclaim, with the success of his Food Network television show “The Inn Chef,” and the release of his best-selling cookbook, “Open Kitchen–A Chef’s Day at the The Inn at Bay Fortune.” But thankfully he never forgot his past. Last year, he purchased the Inn at Bay Fortune and this May, Smith and his wife, Chastity, will launch PEI’s first five-star inn after a complete redesign of its 15 rooms. He has also developed Fireworks, a brick-lined open hearth, grill, and smokehouse. I’d say it’s time for another kayaking trip.