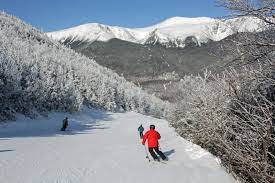 If you missed the ski trip to Jay Peak this past Thanksgiving weekend, don’t sweat it. BSSC, New England’s largest recreation sports association, has many day trips coming up, including Killington, Sunday River, Cannon and Waterville Valley this winter. Weekend trips will venture out to Sugarloaf and Quebec City. After a day or two of carving that perfect turn on the slopes, leave the driving to someone else and meet new friends who share your passion. The BSSC will make stops in Boston, Newton, Woburn, and starting in January, Harvard Square, before hitting the peaks. Cost includes lift ticket and the bus ride. Have a look! 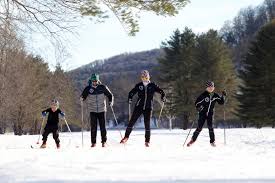 When former Dartmouth ski coach, Bunny Bertram, installed one of the first tow ropes on a Vermont slope in 1937, he played an integral role in establishing one of the state’s top winter locales. In 1961, that ski area, Suicide Six, was sold to Laurence Rockefeller, owner of the Woodstock Inn and Resort, and it became the primary ski resort for their guests. Celebrating its 50th anniversary, the Woodstock Inn Nordic Center provides 45 kilometers of groomed trails surrounding Mt. Peg. Guests can explore the trail network on x-c skis, fat tire bikes, or snowshoes. Another option for backcountry skiers and snowshoers is the Marsh-Billings-Rockefeller National Historic Park, where you can glide or walk under the old-growth forest and around a pond called the Pogue. The Woodstock Inn is now offering four different ski packages, depending on whether you downhill or cross-country ski and bring the family. From January 1 through March 15, the Unlimited Snowsports Package offers accommodations for two nights, breakfast daily, ski passes at Suicide Six Ski Area for two days (rentals not included), and Nordic Center ski passes for two days of cross-country skiing, snowshoeing, and fat tire biking (rentals are included). Package rates for two adults start at $475 midweek, $668 on weekends.

Earlier this year, Vail Resorts added an additional five Northeastern ski areas to its portfolio of resorts. In addition to Stowe, Okemo and Mount Sunapee, the Epic Pass now provides unlimited, unrestricted access to Mount Snow in Vermont; Hunter Mountain in New York; and Attitash Mountain Resort, Wildcat Mountain and Crotched Mountain in New Hampshire. Add one trip out West to either Vail, Park City, or Whistler, and it’s worth the money. Sunday, November 24th is the last chance to purchase the Epic Pass and the entire suite of Epic Pass products for the 2019-20 season. Look through the options and see which one is best for you, including a new Epic Day Pass, with discounts of up to 50% off lift ticket window prices. The Northeast College Pass is $409 for the season with unlimited access to Stowe (except for the Holidays), Okemo, and Sunapee. 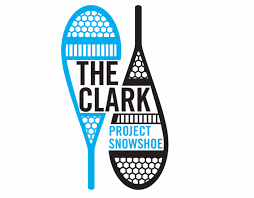 Located in Williamstown in the Berkshire Mountains of western Massachusetts, Clark Art Institute is a treasure trove of Impressionist paintings by Monet, Degas, and no fewer than 30 works by Renoir. American artists are well represented by rooms of Homers, Sargents, and Remingtons. The grounds are also exquisite, set on 140 acres of rolling hills and forest. And now the museum wants you to venture outside as well as inside, offering visitors a chance to borrow a pair of snowshoes for free. The Clark has installed a snowshoe rack and benches adjacent to the west side of its Manton Research Center building. Snowshoes are available in three sizes for both adults and children to borrow. While there, see the Turner and Constable show, on view through March 10th, along with a show on Thomas Gainsborough’s drawings, on view through March 17th.

Like Vermont, New Hampshire has also received a good amount of early season snow, over 3 feet in some ski areas. Loon Mountain and Mount Sunapee is now under new ownership. Loon was purchased by Boyne Resorts while Mount Sunapee is now owned by Vail Resorts. Over at Bretton Woods, they’re busy building the first 8-person gondola in the state. Waterville Valley has added a 12,000 square foot expansion to the Base Lodge, which will allow for better views and more elbow room this season. Also at Waterville Valley, the expansion at Green Peak is now complete, with a total of 10 new trails, including Wayne Wong Way, which features the steepest pitch at the resort. Lastly, as reported here before, the new Glen House Hotel opened in the Fall of 2018 and now provides trailside lodging at Great Glen Trails. So get out there and carve that perfect turn!
Monday, December 3, 2018 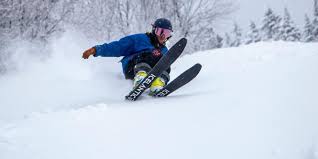 Vermont has been blessed with a deluge of late fall snow, creating excellent early ski season conditions. For example, Jay Peak already has a depth of 44 inches with all of their ski trails open already. And at Killington, Stowe, and Sugarbush, more than half of the trails are already open, so don’t hesitate to hit the trails now. The big news out of Vermont this off-season was Tim and Diane Mueller’s sale of Okemo to Vail Resorts, so Okemo is now part of the Epic Pass. They join Stowe in Vermont, which this season will introduce on-mountain "Kids Adventure Zones." These well-signed areas will give kids the opportunity to easily access gentle freestyle terrain. Mount Snow will be debuting its brand new $22M Carinthia Base Lodge, located right at the base of Carinthia Terrain Park. Lastly, Sugarbush will be celebrating its 60th anniversary this ski season with fun events planned throughout the year. If you need help with lodging and restaurant selections and exciting off-mountain activities, we’re here to help at ActiveTravels! 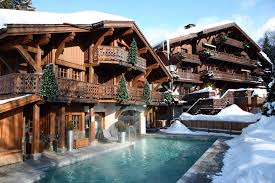 Next week, I’m excited to divulge my 5 favorite hotel openings in 2018. But I thought we’d get things started early with the debut of the Four Seasons’ first European mountain hotel. Especially since Megeve, France has been getting dumped on this past week, with a foot of fresh snowfall in the past 24 hours. A modern interpretation of an alpine chalet, Four Seasons Megeve offers 55 guest rooms and suites, and five restaurants and lounges, including a new incarnation of the Michelin two-star restaurant Le 1920. The only hotel directly on the Mont d’Arbois slopes, expect 235 groomed runs at your front door. 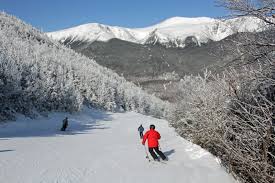 If you missed the ski trip to Jay Peak this past Thanksgiving weekend, don’t sweat it. BSSC has many day trips coming up, including stops at Killington, Sunday River, Loon, Bretton Woods, Sugarbush, and Cannon this winter. After a day of carving that perfect turn on the slopes, leave the driving to someone else and meet new friends who share your passion. The BSSC will make stops in Boston, Newton, and Woburn before hitting the peaks. Cost includes lift ticket and the bus ride. Have a look! 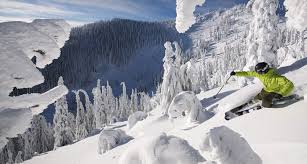 Due to its remote locale and the fact that the Whistler overshadows all the other exceptional mountains in BC, you might not have heard of Red. But take my word for it, you will. In 2013, they added a chairlift up Grey Mountain, adding 22 new runs and a whopping 1,000 acres of skiing, placing Red at pretty much the same scale as Breckenridge and Jackson Hole. A year later they added cat skiing off Mount Kirkup. But size doesn’t necessarily matter when it comes to skiing this beaut. Close to 7,000 feet high and rarely another skier in view, you’re certain you were planted on Red by helicopter. You can ski the entire mountain, front and back, with exceptional intermediate and advanced terrain off the Motherlode Chair. Red’s claim to fame, however, is all the backcountry trails that weave through the trees on neighboring Mount Roberts. And those 360-degree views from the top. Sweet! Ski Red just once and you’ll understand why it’s worth flying to Spokane and driving 2 1/2 hours north to Rossland. 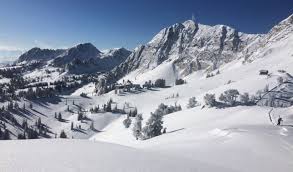 Many of our clients who like to ski Park City and Deer Valley have been adding on days to check out Alta and Snowbird. You should also add Snowbasin and nearby Powder Mountain to that list. Only 30 minutes from Salt Lake City on the outskirts of Ogden, Snowbasin is one of the oldest ski resorts in America, first opened in 1939. But what gets skiers all dreamy eyed is the 3,000-foot vertical and 3,000 skiable acres, more than enough terrain to challenge you during a day or two. If you stay in Ogden, 17 miles away, a free shuttle will pick you up for the ski area. Want more? Powder Mountain has a whopping 7,000 acres of terrain and is still mostly skied by locals and ski writers in the know. They offer a chance to ride up on a snow-cat before skiing down and glorious backcountry runs in Powder Country. So just don’t think of Alta and Snowbird the next time you want to escape Park City. Give Snowbasin and Powder a try.