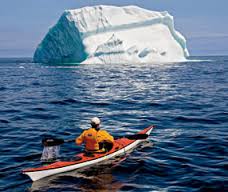 Some of us chase after the morning train to get to work. The more indulgent will chase down that shot of bourbon with a pint of Guinness. And the truly intrepid? They follow Ed English as he chases icebergs. Come June, it’s not unusual for villages on the east coast of Newfoundland to wake up to a mountain of electric blue ice the size of a 15-story building. The icebergs calve from the glaciers of western Greenland and begin a slow 1900-mile journey south with the Labrador Current on a route dubbed Iceberg Alley. English, owner of Linkum Tours, takes sea kayakers up to his lighthouse inn on Quirpoon Island, the northernmost point of Newfoundland, to get as close as possible to the huge crystalline structures before they float away. An added bonus are the pods of humpbacks, minkes, and the occasional beluga whales who feed in Iceberg Alley as they make their way north.