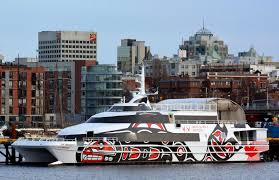 I spent the early part of last week in Manhattan for Canada Media Marketplace, where I met with media reps from all over Canada to hear about the latest travel developments. In a chat with Amber Sessions from Tourism Vancouver, I learned that Vancouver would finally be launching a direct ferry to Victoria. This saves the 40-minute drive to the ferry terminal in Tswwassen from Vancouver and another 30-minute drive from Swartz Bay Terminal on Vancouver Island to Victoria. Frankly, it also eliminates the need to rent a car in either destination. You also have the option to continue on by ferry from Victoria to Seattle to complete a great 8 to 10-day triangle. The Vancouver to Victoria ferry debuts in May. Cost starts at $120 Canadian for the 3 hour cruise. If you’re heading to Vancouver later in the year, be on the lookout for the unveiling of the $600 million Parq Vancouver complex next to BC Place Stadium. The new waterfront development will feature the first JW Marriott in Western Canada, The Douglas, a boutique Autograph Collection property, and eight restaurants and lounges designed by James Beard Award nominated restaurateur Elizabeth Blau.