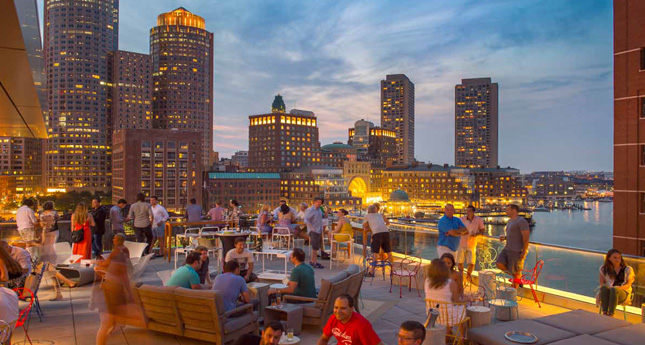 Peering at the sailboats slicing through the harbor from the sixth-floor roof-deck bar of the new Envoy Hotel, it finally dawns on you that, yes, Boston really does rest on the shores of the Atlantic. For some silly reason, Boston has never taken proper advantage of its ocean setting. When the Institute of Contemporary Art opened in a gem of a building on the edge of the harbor in December 2006, publicists started to dub the evolving neighborhood the Seaport District. Yet, five years after the ICA opening, not much changed. A sea of parking lots continued to surround the ICA and wharves still lined the harbor of this industrial port.

Then, in 2013, Vertex Pharmaceuticals made the bold initiative to move the company’s global headquarters to twin 18-story buildings featuring 1.1 million square feet of research labs and office space. Other companies joined them, including Manulife Financial, Fidelity Investments, and PricewaterhouseCoopers. At last, the late Mayor Menino’s dream of a burgeoning Seaport District has taken root. Everywhere you look along the waterfront today, new condominiums and office buildings are being constructed.
To read more about visiting the Boston Waterfront, including my hotel and restaurant picks, check out my latest story for Global Traveler.