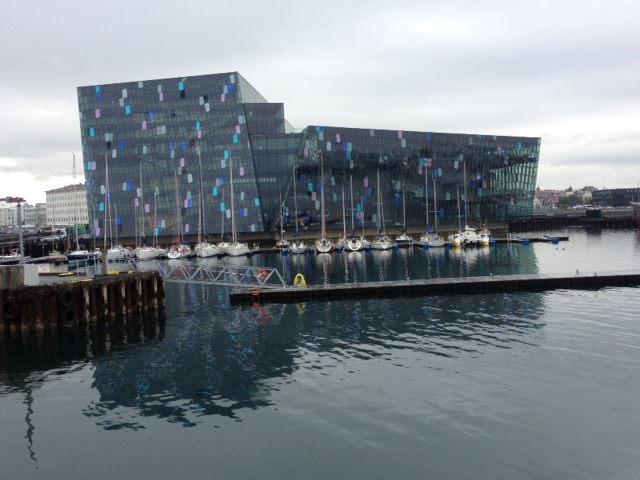 With its magical mix of volcanoes, glaciers, waterfalls, geysers, rugged coastline, green meadows, and geothermal spas like the acclaimed Blue Lagoon, it’s no wonder that Iceland has become a popular destination for our clientele. It’s also an easy 5-hour flight from the East Coast and a free stopover on Icelandair to other European destinations like Stockholm, Copenhagen, or Barcelona. So there’s no excuse not to check it out. I just spent a week in the country and had a great time. My first outing was a morning bike ride with Reykjavik Bike Tours to get an overview of the city where two-thirds of the Iceland’s population of 330,000 resides.

We biked past one of Reykjavik’s signature buildings, the recently built Harpa Concert Hall, a gleaming glass building that reflects both sky and water. Then we cruised into the heart of the city on cobblestone streets to one of the most historic neighborhoods, simply called 101. At the Parliament Building, we learned about Iceland’s 2008 bankruptcy and their historic vote not to pay off their debt to the UK. “Instead of cash, we gave them ash,” said our guide, referring to the volcanic ash disruption of international flights in 2010. We stopped at one of the 120 outdoor pools in the city, open year-round and heated by the abundant thermal energy. We also biked past Bjork’s modest home and pedaled through the University of Iceland’s campus, home to 17,000 students, 70% of whom are women (note to son: this is the school where you want to spend your semester abroad).