Biking Along the Charles in Boston 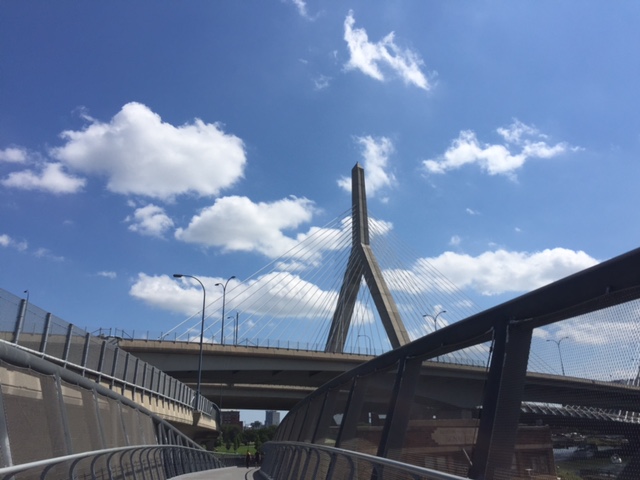 At least one Sunday every summer, we park our car at the large parking lot near the Artesani Playground Wading Pool (1255 Soldiers Field Road, Brighton) and bike along the Charles River into Cambridge. Near Mount Auburn Hospital, Memorial Drive is closed to cars for a good mile or so on Sundays, before you hit the sidewalk and pedal along the water. The river is full of activity, with scullers and crew teams sharing the water with sailboats and motor boats making their way out to Boston Harbor. On the Cambridge side, we pass Harvard and MIT while peering across the Charles at the Prudential Center, Citgo sign, and the distinctive gold dome of the Old State House. At the Museum of Science, we head across the street to North Point Park, a new gem of a park that looks up at the Zakim Bridge. A bike trail zips up past a skateboard park just under the bridge and over to Charlestown. Look down and you can see the boats waiting for the waters of the locks to rise. A mandatory stop to see the USS Constitution before crossing the Charlestown Bridge into Boston and heading to the Boston Public Market for tasty chicken shawarma in a pita at Inna’s. Then we head along the Charles on the Boston side through the Esplanade all the way back to our car. Give yourself a good 4 hours if you want to stop for lunch and take photos.