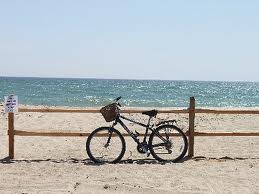 Bike trails on Nantucket branch off in every direction, like the spokes on a wheel. My favorite ride, especially in the spring, is the 6-mile jaunt from town to Madaket Beach. Head out on Cliff Road. You’ll quickly meet up with the Cliff Trail as you pass the rolling meadows and red-winged blackbirds at Tupancy Links conservation land. Merge with the Madaket Trail and you might be greeted by flittering goldfinches and osprey peering out from their oversized nests. When the trail becomes sandy and you can hear the pounding surf, you know you’re getting close. On the westernmost part of the island, the beach slopes down to the crashing waves. All around you is water, as if you’re stepping off land into the great abyss. If you don’t have the energy to do the return trip, the Wave bus runs until 11:20 pm and has a front rack for two bikes.

Spend the night at the Century House on Cliff Road and general manager, Otilia, will have a bike from Nantucket Bike Shop waiting for you. An avid biker, Otilia will also direct you on other routes to Brant Point and Sankaty Head lighthouses. Rooms, including full breakfast, start at $175.