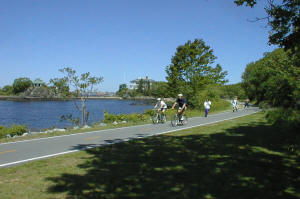 All it takes is a mere six miles on a paved path to leave a highly industrialized section of Providence and reach the sheltered coastline of Narragansett Bay. No wonder locals would rather bike to the beach than deal with car traffic. The 14.5-mile long East Bay Bicycle Path, originally part of the Providence/Worcester line, heads southeast from Providence along the scenic shores of the bay to the town of Bristol. Less than two miles into the ride, fishing trawlers and sailboats start to appear on the right and small inlets and wetlands can be seen on the left. Head there this weekend and you’re likely to see locals clamming for littlenecks in the shallow waters along the route. That’s quite a contrast from the view of the Providence skyline that lurks behind you. Soon you’ll reach Colt State Park and Bristol Town Beach, the finest spot for sunbathing along the route. The trail ends in Bristol at Independence Park, near a handful of restaurants that I wrote about in last Sunday’s Boston Globe travel section.

Next week I’ll be back with my 5 Favorite Fall Adventures in North America. Have a great weekend and keep active!