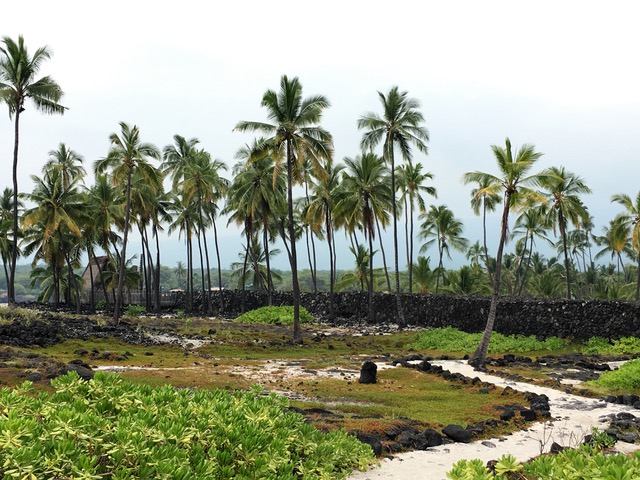 Guest Post and Photo by Amy Perry Basseches
This is the last post about my May 2018 week in Hawaii. For this one, I’m going to focus on a few unusual and not-to-be missed sites we visited other than the ones already described in Holualoa and Hawi. So much fun!
One day, driving along, my daughter and I saw a small sign on the side of the road for the Paleaku Gardens Peace Sanctuary. We both love to be outdoors so we gave the botanical garden a try. We were not disappointed in the hours we spent wandering the paths through unique plant and rock arrangements, orchards, and groves, including the world’s first galaxy garden, a 100-foot diameter outdoor scale model of the Milky Way, mapped in living plants and flowers. Who knew?
PuÊ»uhonua o HÅnaunau National Historical Park is a US National Historic Park on the site where, up until the early 19th century, Hawaiians who broke a kapu (ancient law) could avoid certain death by fleeing to this place of refuge, or puÊ»uhonua. The offender would be absolved by a priest and freed to leave. While it has a slightly reconstructed hokey feel, I was glad to understand more about historic Hawaiian communities from long ago through an archeological site tour including: the authentic 400-year-old "Great Wall," temple platforms, thatched structures, and royal fishponds.
Many people recommended "snorkeling with Manta Rays experience" which was cool but crowded (so be prepared). Due to bright lights shining from hotels on land, plankton and the manta rays which feed on them have concentrated in certain areas on the Big Island. We went out with Fair Wind Charters on their evening Manta Snorkel, leaving from Keauhou Bay, and were surrounded by other boats and lots of excited tourists. Mantas are very gentle – no teeth, stingers or barbs — and, while we were holding onto a floating frame looking down, they swam all around us in a graceful show, taking in large quantities of plankton through open mouths. This outing requires a comfort with wearing a wetsuit, being in the water for a long time, and using a snorkel, but no special "skill". Definitely something you won’t see or do ever again!
In the Hawaiian language, lomi means "to knead, to rub, or soothe," and lomilomi massage practitioners use their palms, forearms, fingers, knuckles, elbows, knees, feet, and even sticks and stones. Historically, future practitioners were selected in childhood, around age 5, based on birth signs such as weather events, birthmarks (especially on the head), and kind behavior, and they required a decade or more of study. Lomilomi today, like so many ancient art forms, has been corrupted. Beware if you are trying to get a lomilomi massage; seek someone specially trained, like Teresa at Ka Lima Hana Kukui. Her massage is still a modernized version of lomilomi, but she grew up watching her grandparents performing lomilomi massage using Kukui nut oil, and her massage was wonderful.
Please contact ActiveTravels if you are interested in any aspect of Hawaii and ask Amy for Big Island recommendations. We’d be glad to help. Don’t worry too much about heading to the Big Island with the unpredictability of the Kilauea volcano; it is 100+ miles away from the Kona airport!