Back at the Track 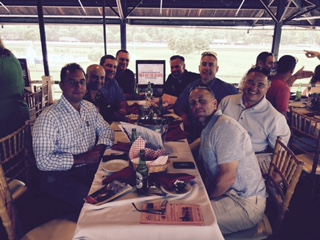 It was great to spend the weekend with my high school buddies in Saratoga. One of them has a summer home on the shores of Saratoga Lake, less than a 10-minute drive to town and the legendary Saratoga Race Track. There’s no better place to watch horse racing in America. Buy a copy of the Schenectady Gazette and a tip sheet or two on the way in, grab a seat, and start placing your bets. You’ll no doubt be standing with the rest of the crowd, cheering on your horse to cross the finish line first. Afterwards, many people head to Siro’s and Horseshoe to listen to live music. On Saturday night, we checked out the downtown Saratoga bar scene, which on a weekend in August feels like the French Quarter in New Orleans. All five floors, including the roof was packed at Saratoga City Tavern on popular Caroline Street. Druthers on Broadway Street also has live music and a good crowd on their outdoor patio. The next morning, work off your hangover with blueberry or lemon ricotta pancakes at Sweet Mimi’s, served with real maple syrup. It’s been voted the best breakfast joint in town the past 2 years, since it opened. It’s also owned by the wife of another high school buddy so I have to give it a plug.