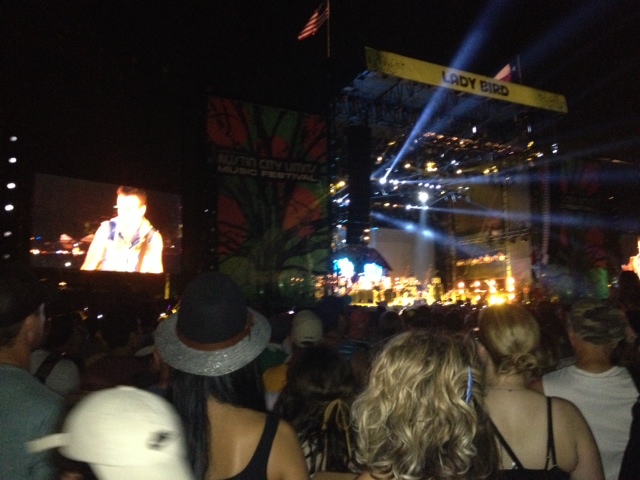 Just back from the three-day music festival, Austin City Limits. Even with Sunday’s postponement of the show due to heavy rains and flooding, it was still worth the effort to fly into town. With six stages on the edge of an expansive lawn, it never felt too crowded and we could easily see Muse, The Cure, Depeche Mode, Vampire Weekend, Passion Pit, the new sisters trio, Haim, and Kendrick Lamar. Lamar could have easily headlined the event, attracting a massive crowd that was lining up all day at his stage. We were bummed to miss The National and Atoms for Peace shows on Sunday, but then in the late afternoon, sitting around watching football at a sports bar, we heard that Atoms for Peace was going to play an impromptu show at a 2750-seat theater several blocks from our hotel. We stood on line for several hours to snag one of the coveted wristbands that let us gain access to the venue. Around 10:30, I was standing center balcony with two college buddies when Atoms of Peace frontman Thom Yorke of Radiohead fame came out with bassist Flea from Red Hot Chile Peppers, wearing skirts and colorful high top sneakers. For the next 90 minutes, the 5-piece band treated the fortunate few to a mesmerizing set of pulsating percussion and funky bass lines, layered with keyboardist Nigel Godrich’s hypnotic electronica and Yorke’s ethereal voice. It was electrifying. No one was sitting. We were all dancing, feeding off the world beats and the energy of Flea skipping around the stage like a wild man. A memorable show I won’t soon forget.