Another Relaxing Day on the Schooner Mary Day 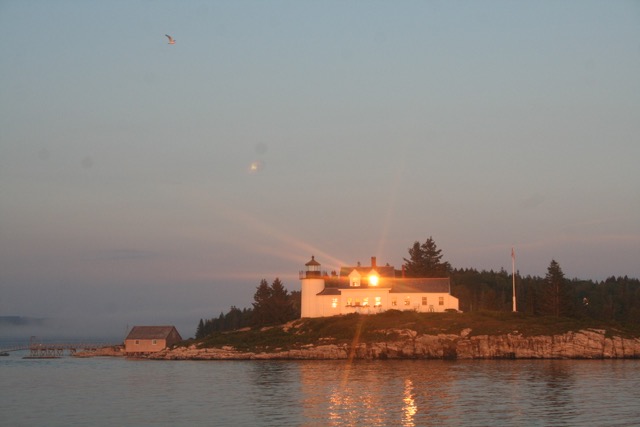 We wake up to blinding sunshine at Buck’s Harbor in South Brooksville, best known as the spot where children’s book author and illustrator Robert McCloskey (“Make Way for Ducklings,” “Blueberries for Sal”) summered. FDR would also stop here on his way to Campobello Island for a short ice cream break. We found some of those famous wild Maine blueberries in our pancakes that morning before hoisting the sails and setting a course for that hump atop Big Spruce Island. Each one of these Penobscot Bay harbors and islands has a legacy and Big Spruce Island is no different. This is the place where artist Fairfield Porter and his brother, photographer Eliot Porter, would spend their summers and there’s still a working artists’ community on the island today.

We sailed close to an 8-knot clip passing a gray seal who popped his head out of the water like a periscope, stocky razorbill auks, and more porpoises. Pulpit Harbor on North Haven was far too congested for Captain Barry so we continued on to Islesboro, the ridge of mountains on the mainland not far off. We anchored in a placid harbor where there were no other boats.
“What do you call this place?” I asked Captain Barry.
“Snug, beautiful harbor,” he said.
“You’re not going to tell me the real name, are you?”
“Nope,” Captain Barry said. Then he reached for his guitar and started to sing a Woody Guthrie tune as we watched another magical sunset.