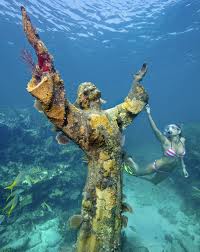 Escaping the snow of the northeast, I’m hiding out in the Florida Keys this week. My first stop is always Captain Slate’s Atlantis Dive Center just over the bridge in Key Largo. In operation since 1978, Slate is the premier snorkel and dive operator in the region. In 2004, he received the International Scuba Diving Hall of Fame Award for his early work on diver and boater safety. Slate took a group of eight of us 7 miles out to sea to Grecian Rocks, a coral reef located in the Florida Keys National Marine Sanctuary. Surrounded by aquamarine waters, the vibrant reef is easily one of the premiere snorkeling spots in America. Before we snorkeled, Slate took advantage of his glass bottom boat to show us the Christ of the Abyss statue, a 9-foot tall bronze statue attached to a concrete base and placed in 25 feet of water back in 1965. Then we were off the boat watching a stingray swim gracefully above the sand. Purple fan coral way swaying with the current attracting barracudas, while I spotted a very cool midnight parrotfish with her neon blue lips poking at the brain coral. Visibility was outstanding and all was bliss for the next hour.