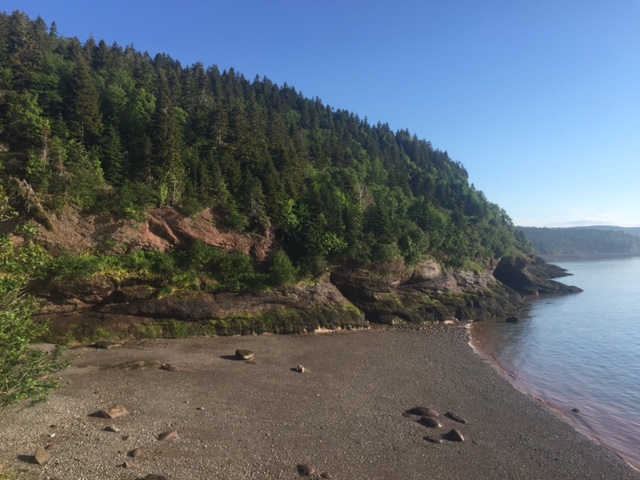 We woke up early today to hike a 90-minute loop in Fundy National Park to Matthews Head. Breakfast could wait! Except for a handful of bunnies and noisy chipmunks, we had the trail to ourselves. We hop-stepped it through the web of roots through a forest of tall timbers, the reward soon appearing as one stupendous vista of the coast. High atop the hills of Fundy National Park, we looked down on the jagged shoreline, rocky beaches, and boulder-strewn coves. The Bay of Fundy waters were still this early in the day. All you could hear was the lapping of the water and see the sunlight shimmering on the bay to create a magical light show.

From Alma, we drove 90 minutes to Dominion Park in Saint John to paddle on the mouth of the Saint John River with Go Fundy Events. Our guide, Dan, escorted us past the limestone cliffs to see the earliest fossils recorded by scientists, curly-cues and concentric circles on the cliff face. As we made our way around the bend, Dan pointed out a massive eagle’s nest in a tall pine but we couldn’t find any birds. We did however, spot a large sturgeon jumping out of the water. We paddled onward to find the remains of a lime quarry dating from the 19th century, red bricks that were imported from Scotland. Then we turned the kayaks around and peered up to see the wingspan of an eagle and that distinctive white head. Soon another eagle joined him, his talons holding on to a fish, possibly a sturgeon. They flew above us for a good 10 minutes, stopping only to find a perfect perch, as we continued to paddle back into a strong headwind. It was remarkable end to a memorable day of play on the waterways of New Brunswick.