Adventures in Ecuador: Biking, Snorkeling, and Relaxing on Isabela 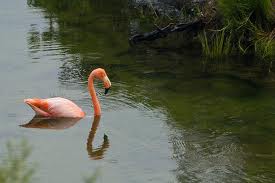 Isabela is the largest of all the Galapagos Islands and is blessed with the longest stretch of white sand beach, where we spent two nights at La Casita de La Playa. Within walking distance are restaurants, beachfront bars, a good bakery, and several souvenir shops in a sleepy town about 6 dirt blocks long.

On Isabela, we walked on an island covered with hardened black lava and black iguanas, saw white-tipped sharks sleeping in a channel, those famous blue-footed boobies and Galapagos penguins standing on the rocks, and swam once again with massive sea turtles. Our favorite outing was renting bikes to visit a lagoon filled with flamingoes, a giant tortoise breeding center, and then riding on a road along the long beach to a former fort, the Wall of Tears, used by the American during World War II. It was a special treat to bike past large tortoises on the side of the road.
Make sure to bring $100 in US dollars for each person upon arrival at the Galapagos Airport (they don’t take credit cards) and give yourself at least two hours at the Quito Airport to figure out the three lines you’ll have to navigate. Once in the Galapagos, we’re happy to suggest a land-based itinerary or cruises that come highly recommended.
We’re spending a week at one of our favorite New England resorts next week, the Basin Harbor Club on the shores of Vermont’s Lake Champlain. I’ll be back on August 19th. In the meantime, keep active!