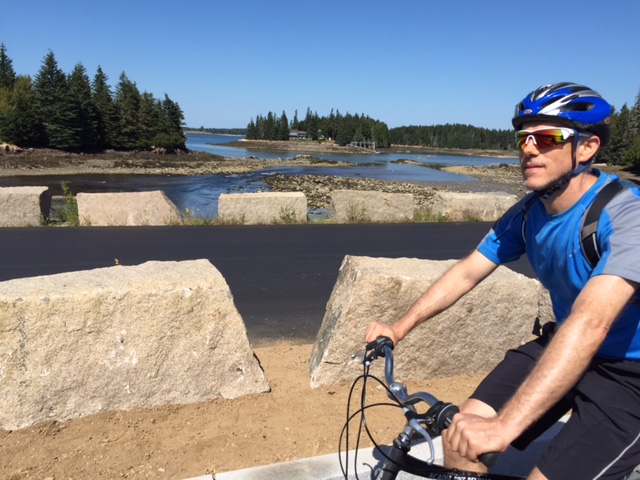 If they call the western half of Mount Desert Island the Quiet Side, they should call Schoodic Peninsula the Secret Side. Still part of Acadia National Park, Schoodic is a good hour drive from Bar Harbor, so few people outside of Mainers in the know head here. Do yourself a favor and follow their cue. You’ll thank me. On a day when two large cruise ships dropped off over 4,000 people into Bar Harbor, we took a ferry smaller than a tugboat, The Quoddy Bay, and took off to Winter Harbor, the gateway to the Schoodic Peninsula. There’s no longer any need to drive to Schoodic, especially if you want to bike the 10 to 12-mile loop. You can get here on a scenic hour-long boat ride ($39 round-trip, including bicycle), mesmerized by the views of pine-studded islands, the mountainous shoreline, and the granite cliffs.

Acadia National Park has made it easy for bikers to access the Schoodic Peninsula. The paved road Park Loop is one way with two lanes, so cars can easily pass you. Secondly, this summer they just created 8 miles of carriage path trails, hard-packed gravel routes only available to bikers and hikers. After taking the Park Loop, we would return via the carriage path trails, crossing the entirety of the peninsula past the new national park campground that opened last Wednesday. Most importantly, there’s very little traffic here. This is a very serene part of the national park that few venture to.
We biked along the rocky shoreline, stopping to walk atop a breakwater and watch the tide rush out to sea. All around you is the Atlantic with another memorable seascape to savor, be it a lone sailboat gliding through the open water, an unchartered island just offshore, or pink granite ledges that form one of the highlights, Schoodic Point. People pull over anywhere along the loop to picnic, swim, or take short walks like the East Trail, which climbs a half-mile to 440-foot high Schoodic Head.
Near Schoodic Point is another worthwhile stopover, the Schoodic Education and Research Center, housed in a stone and brick building John D. Rockefeller, Jr., created for the US Navy in 1935. Recently renovated, the building is now home to the nonprofit Schoodic Institute, an educational and research group dedicated to conservation and ecology. Head inside to see exhibitions on the local wildlife and the Navy’s history of monitoring encrypted messages inside this building. There are many surprises on Schoodic Peninsula, so don’t hesitate to make the extra effort to get here.